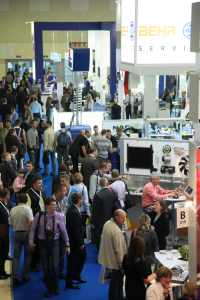 Advnanotech, a Research Frontiers licensee, will display its SPD-SmartGlass (suspended particle devices) aftermarket sidelites on a Mercedes-Benz G400 automobile today at Automechanika 2013 at the Expocentre in Moscow.

The Mercedes-Benz G400 vehicle is upgraded with Advnanotech’s ADVGlass brand of SPD-Smart aftermarket sidelites, according to officials.

SPD-Smart automotive sidelites, rear windows and sunroofs are designed to help reduce unwanted light and glare, which can allow users to “maintain their views of the outside and to enjoy glare-free viewing of displays and video screens,” according to officials.

The glass is also designed to minimize heat build-up inside the vehicle because of its ability to block solar heat gain, officials point out. They explain that the glass switches to its maximum heat-blocking state when a vehicle is not in use. The sidelites are also tinted to give passengers privacy.

Advnanotech is licensed by Research Frontiers for SPD-Smart architectural and automotive products in Russia. The company has an infrastructure of representatives in the country to meet product demand. 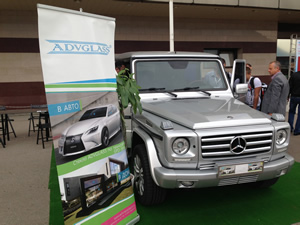 The Mercedes-Benz G-Class, G-Wagon or Gelenvagen (cross-country vehicle) is a four-wheel drive SUV produced by Steyr-Puch (now Magna Steyr) in Austria for the German automaker.

Since the license was announced in March 2013, Advnanotech has displayed its SPD-SmartGlass aftermarket products at the World of Glass Expo in Moscow in May and will debut the brand at Automechanika 2013.