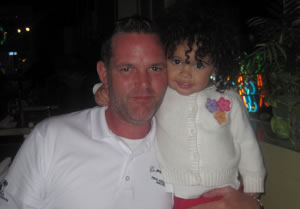 In a custody battle that went all the way to the U.S. Supreme Court, Matt Capobianco, a former longtime employee of Glasspro in Charleston, S.C., and his wife, Melanie, have won custody of the daughter they have sought to adopt for more than two years, according to reports.

Though the South Carolina Supreme Court recently finalized the Capobiancos’ adoption of baby Veronica, the case continues to remain tied up in the courts after the biological father, who lives in Oklahoma, has refused to hand over custody.

An arrest warrant was issued for biological father, Dusten Brown, after he refused the court decision to allow his daughter to be reintroduced to her adoptive parents.

Originally, brown had successfully argued in the South Carolina courts that the termination of his parental rights was invalid under the Indian Child Welfare Act.

He was not married to the Hispanic mother of baby Veronica. The biological mother had selected the Capobiancos as her adoptive parents.

The Capobiancos appealed the state ruling to the U.S. Supreme Court, which decided in favor of the adoptive couple.

Justice Samuel Alito writes in the majority opinion for the Supreme Court, “This case is about a little girl who is classified as an Indian because she is 1.2 percent (3/256) Cherokee. Because Baby Girl is classified in this way, the South Carolina Supreme Court held that certain provisions of the federal Indian Child Welfare Act of 1978 required her to be taken, at the age of 27 months, from the only parents she had ever known [Matt and Melanie Capobianco] and handed over to her biological father, who had attempted to relinquish his parental rights and who had no prior contact with the child. The provisions of the federal statute at issue here do not demand this result.”

The U.S. Supreme Court ordered that the South Carolina court reconsider its decision, which it did.

Brown refused to bring Veronica to a court-ordered transitional meeting with her adoptive parents on August 4. The South Carolina court responded to this refusal by ordering that Veronica be immediately turned over to her adoptive parents and local authorities issued an arrest warrant for Brown, charging him with custodial interference.

Brown surrendered this week to the Sequoyah County Sheriff’s Office in eastern Oklahoma.

He refused extradition and paid bond and has another court hearing within 30 days.

However, a hearing by the Cherokee County Court was moved up to today after Brown was arrested and released on bond. All parties are due in the Cherokee Nation court today.

As soon as the Capobiancos’ learned of the hearing, their attorney asked for and was granted a writ of habeas corpus, which requires the person at the center of the case—baby Veronica—to be brought to the hearing.

The Capobiancos have not seen baby Veronica in more than two years.

“We fought for Veronica through the courts and won,” says Matt Capobianco in a statement released via SaveVeronica.org. “In the end, it has been decided by every court who has reviewed this case that Veronica is our daughter and we are her parents. … Enough is enough. … No more delays, no more excuses. Our daughter has been kidnapped and I expect the situation to be treated as such.”