William Ives, a longtime attorney for the Auto Glass Safety Council™, was honored with the Carl F. Tompkins Award for Excellence in Auto Glass Safety, while Dave Taylor, retired chief operating officer for Cindy Rowe Auto Glass in Harrisburg, Pa., and a founding member of the National Windshield Repair Association (NWRA), was recognized with a new NWRA award named in his honor today at Auto Glass Week™. 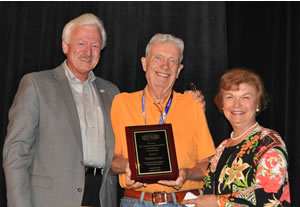 Ives, an avid fan of Winston Churchill, has worked with the AGSC for many years. Carl Tompkins of Sika surprised Ives with the award created in his honor four years ago. Tompkins noted Ives’ dedication to the industry during the Welcoming and Industry Awards Presentation this afternoon. Ives’ wife, Virginia, also flew in for the presentation.

Ives, clearly overcome with appreciation, had tears in his eyes. Tompkins said Ives and his wife, Virginia, have visited more than 233 countries.

“Bill kept us together to help bring the best thing our industry has seen,” Tompkins said. “It is a much more professional industry thanks to the professionalism of Bill Ives. … He always led with his heart and for that we should all be thankful.” 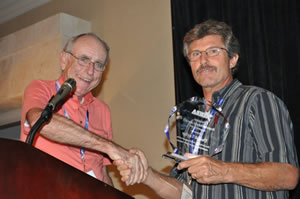 Meanwhile, Richard Campfield, president of the NWRA, presented Taylor with the inaugural NWRA award. Taylor married Cindy Rowe in the mid-1980s and went on to devote many years to furthering the auto glass repair industry. He played an integral role as a founding member of the NWRA and spent much time as its president.

“Dave has always had the gift of foresight,” Campfield said, quoting Rowe.

Taylor also has always given his time to anybody who has needed it, Campfield added.

“Many years ago we sat around a table [forming the NWRA] and the only one still here is Richard Campfield,” said Taylor. “It’s a great honor. I accept this award and I also think it belongs to the other people who were there when the NWRA was formed.”

Auto Glass Week is being held at the Tampa Convention Center and Tampa Marriott Waterside Hotel and Marina this week. It continues through Friday. Stay tuned to www.glassBYTEs.com™ for the latest from the event throughout the week.