‘Are We Still Close that Way?’ 9/11 Survivor Shares His Story 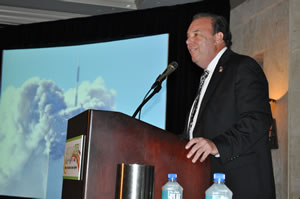 In an emotional presentation, today’s keynote speaker for Auto Glass Week™, FDNY Chief Richard Picciotto, the highest-ranking firefighter to survive the September 11, 2001, attacks on the World Trade Center, shared his harrowing tale of the infamous day.

He was in the North Tower on the 35th floor when the buildings began to fall.

“It’s a day that we all remember,” he said. “I’m going to tell you where I was that day. A chief is on duty all the time … My tour didn’t officially start until 9 a.m., but I relieved the other chief early, around 7 a.m.”

He added that he was in charge of the evacuation of the north tower in 1993 during the time of the World Trade Center bombings, so he happened to know the building inside and out.

“Some of the things I knew about the building: I knew the floor area of each building was an acre,” he said. “The two buildings were a total of 200 floor acres. There were 99 elevators in each tower … There were three stairwells … All of the elevators were out of service.”

The fire burst through the fire walls. Picciotto said all they could do was contain the fire, not try to put it out.

“When I got down there, it was horrendous what I saw. Not only that, but what I heard.” Piccotto slapped the table to mimic the sounds of the victims of the attack, falling from the building. He told the audience the first firefighter to die in the attacks died from someone falling on him.

After making his way up through the building, Picciotto said he was stopped by a terrifying noise and sensation.

“I get up to the 35th floor and step out in the hallway … all of a sudden, the building starts shaking really loudly, shaking and banging and I don’t know what’s going on … I’m pretty sure everyone does what I did–we froze because no one knows what’s going on. There’s something coming down. I could feel; I could hear it. That bang and that noise was literally going right through my body. Banging and shaking … then it stopped,” he said. “There’s an expression: the silence was deafening. You could hear a pin drop … because everyone in that building did what I did–we froze. Everyone is looking to me because I’m chief, as though I should know what that was.”

Picciotto said it was then he received confirmation and reports this was a terrorist attack. In his mind, he knew he had work to save lives before any more of the buildings fell under fire.

“I gave the order to evacuate,” Picciotto said. “That means the rescue workers get out. It was the toughest order I’ve ever given in my life, because I knew that meant the people on the top floors didn’t stand a chance … when I gave the order to evacuate, the north tower had been burning for an hour … it wasn’t likely many of the people on those top floors were alive, and those who still were, we weren’t going to be able to help.

“I’m telling everyone, get out as fast as you can. If you find an injured person, grab them and drag them but do not treat them onsite. But no one is moving. I find out that they can’t move,” said Picciotto. “From the South Tower, 110 acres of building  fell …  Some of the rubble blew back up and mushroomed. The nearest building was the North Tower … the ground was filled with debris … it was filled with people not moving because they couldn’t get through.

“I want to be out of the building so badly; I know it’s coming down. Then I hear the noise and feel the rumble again … The building is literally coming down and falling apart. As it comes down it’s flattening the level above it,” he said. “It took the South Tower 10 seconds to come down. It took the north tower eight seconds.”

As the tower fell, Picciotto said he saw what was most important to him.

“What do you do in what you think is going to be the last eight seconds of your life. People say your life flashes before your eyes. That’s what happened to me.  I saw my family. Then I prayed … I never prayed so hard in my life. I prayed what I wanted too much: I didn’t want to suffer. ‘Please God, make it quick.’ Then the floor I’m standing on disintegrates and I’m free-falling in blackness,” he said. “Black. Silence. Still. ‘Well, I guess I’m dead now,’ I thought. It was the loudest and most violent thing anyone has probably ever experienced, and then silence and blackness.”

After realizing he was still alive, Picciotto said he felt himself covered in thick amounts of dust.

Picciotto said he told people not to move, because he understood the building had collapsed.

“A friend from Queens heard what had happened and came down with a radio and I was able to get in contact with him … he said he get some guys to try and find me. I asked him not to leave my frequency so we stayed in contact,” he said. “I remember I have my bullhorn so I speak over it to try and help them find us … this goes on for a couple of hours and they can’t hear me. There’s 100 to 200 feet of debris on me.

“You have to hand dig … around this time I’m also getting very tired and lethargic. I think I’m just going to close my eyes and take a nap. I realize I’m asphyxiating. It wasn’t a very bad thought, it was better than wondering how long I’d have to go without eating or drinking … then just above me something is turning a dark grey out of the black. I could be hallucinating from the lack of oxygen, but I’m pretty sure I see it. I call out and some of the other guys see it … All of the smoke mixed with the dust and obscured all of lower Manhattan and that’s why we hadn’t been able to see the light,” he said.

“After another hour or two, I decide to tell everyone to stay where they are and I’m going to climb up to this light. Then I’m out and I’m on top of the largest debris field there … I made sure other fireman knew where everyone was then they put me in an ambulance and took me to the hospital,” he continued.

The event helped Picciotto realize the greater meaning of his life.

“My prayers weren’t answered that day. I prayed to go quickly, but that didn’t happen. Sometimes unanswered prayers are best.

“Also, if you remember 12 years ago what was this country like? We treated each other kinder. We stood together as Americans. Are we still close that way?” he asked.