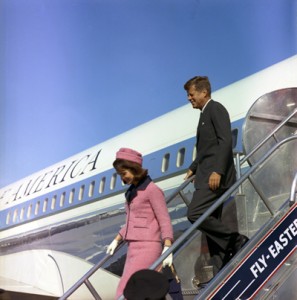 Fifty years ago today, President John F. Kennedy took that fateful ride in Dallas past the Texas School Book Depository in an open convertible limousine and his life was cut excruciatingly short. It is a day etched inthe mind of the nation’s memory.

On the morning of November 22, 1963, the Kennedys left the Fort Worth hotel where they had spent the night and made the short trip to Love Field.

“Since it was no longer raining, the plastic bubble top had been left off,” according to John F. Kennedy Presidential Library and Museum.

Reporter Jim Lehrer was at the Dallas’ Love Field when Air Force One arrived.

Looking at the President’s motorcade prior to the Kennedy’s disembarking the plane, Lehrer said he saw the “bubble top” on the convertible. He asked a Secret Service agent if it would remain in place.

According to Lehrer, it had been raining in Dallas, but by late morning it had cleared. Lehrer said he asked a secret service agent, “Are you going to keep up the bubble top?” The agent had a two-way radio connecting him with other agents downtown. “He checked with them—it wasn’t raining—and he made the decision to take the bubble top down,” said Lehrer.

“It wasn’t there for protection or security, it was there for weather,” he explained in a local report. “Kennedy was adamant; he didn’t want people to think he was something under glass, not to be touched.”

In fact, Lehrer based his book, “Top Down” on the decision to take the roof off of the vehicle.

“If it was up, Oswald might not have taken the shot. He might have thought it was bulletproof (sic). Or the quarter-inch Plexiglass might have deflected the bullets. Or the glass could have shattered into shards and killed everybody,” Lehrer said in the report.

When he decided to write the “what if” work of fiction, Lehrer went back to the Warren Commission report to see what had been discovered.

“They thought it was too bad that the bubbletop wasn’t up—people thought it was bulletproof—but nobody made a big to do about it. There was never any kind of re-creation to see if it would have made a difference,” Lehrer said.

Calling glass bullet-resistant is more accurate for those who work in the industry.

What exactly is bullet-resistant glass? It might look the same as an ordinary glass lite, but it is not.

Bullet-resistant glass is designed to withstand one or several rounds of bullets depending on the thickness and composition of the glass and the weapon being fired at it.

There are different variations of bullet-resistant glass, which is produced by layering at least one polycarbonate material between lites of ordinary. This process creates a glass-like material that is thicker than normal glass.

Back to that fateful day, once the President and First Lady entered the roofless vehicle, it left the airport and traveled along a ten-mile route that wound through DealeyPlaza and past the Texas School Book Depository.

At about 12:30 p.m., on November 22, 1963, “bullets struck the president’s neck and head and he slumped over toward Mrs. Kennedy. The governor was also hit in the chest,” according to the Presidential library.

“The car sped off to ParklandMemorialHospital just a few minutes away, but little could be done for the President. A Catholic priest was summoned to administer the last rites and at 1 p.m., John F. Kennedy was pronounced dead,” the library reports.

Offering some thoughts on the Kennedy assassination via the AGRR™ magazine forum, one glassBYTEs.com™ reader wrote, “The bubbletop on the Lincoln was not ‘bulletproof’ glass and I don’t think it was made of glass at all. It was just for times when it called for rain, writes “Glen Burnie Glassman”

“L.W.” writes, “I was only five at the time. JFK was supposed to come to our town later that day.”

Fast forward to today and the presidential transportation is much different than it was 50 years ago. Here President Barak Obama is seen riding in a highly-armored limousine with bullet-resistant glass. When the president leaves the protection of the vehicle, is it usually highly coordinated by the Secret Service and only for a limited time.