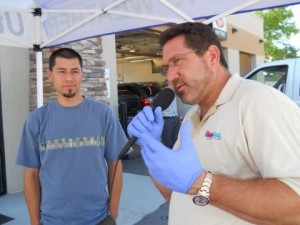 Troy Mason, president of Techna Glass, spends some time on the microphone during the fundraiser.

Techna Glass’ Utah auto glass shops recently raised money by inviting consumers to come out and get their windshields repaired with all proceeds going to Primary Children’s Hospital.

“We did a live radio broadcast working with KSL, a local a.m. radio news station that is a real phenomenon in Utah. It gets amazing listenership,” says Troy Mason, president of Techna Glass.

“We hosted the broadcast out of our Sandy, Utah, location, which is our headquarters. But the fundraiser was held at all Utah locations within reach of the radio stations,” he adds.