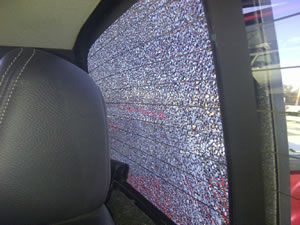 One 2010 Ford F-150 owner sent this photo to NHTSA of the alleged damage caused to his or her backlite by the rear defroster.

More than 20 F-150 Ford owners of the 2010 model year have complained to the National Highway Traffic Safety Administration (NHTSA) that an alleged glitch in their rear defrosters has caused their backlites to shatter or spiderweb in cracks.

“On a 40-degree morning, I turned the rear defroster on to clear the windows and mirrors. as I was driving my son to daycare, I heard a large pop and then smelled burning rubber. I looked and saw the right rear glass shattered and it was shortened out by the heating element,” reported one owner to NHSTA on December 15, 2013.

Another owner who wrote to NHTSA on December 9, 2013, reported that “The truck was outside in 11-degrees. I started the vehicle and turned on the rear defrost. Within two to three minutes, the left panel (on the driver’s side) of the three-piece sliding rear window shattered while I was stopped at a traffic light.”

In another reported instance, the owner says the back light shattered near where his or her son was seated in the truck.

“The external temperature was -22 degrees and I had the rear window defroster and heating unit in the diver’s seat turned on. The front defroster was set to the highest temperature. While driving at 25 mph, my son and I noticed a burning smell. He was seated in a booster in the rear seat, passenger side. He advised me that he could hear something behind him making noise. I looked back and observed smoke coming from behind the rear passenger headrest where my son was seated. I looked forward to find a spot to pull over and then heard a loud bang. Looking back, I saw the rear window was shattered on the passenger side. It is a sliding rear window with three sections. Only the passenger section directly behind my son was shattered.  The glass remained in place, but shattered. I quickly pulled over, shut off the truck and removed my son. From the outside, I can see the plastic lower corner melted where the passenger glass meets the center glass section. The rubber seal/moulding was smoking and had melted and dripped down the back of the truck cab between the cab and the truck bed/box. Inside there is a strong odor of burnt rubber or plastic,” the owner alleges.

Several of the owners involved in these alleged incidents reported the situations to dealers and Ford; however, no remedy or “fix” was offered, they told NHTSA.

“The dealer is telling me that the glass is not covered under the extended warranty,” writes one owner in a complaint.

Another owner writes, “The truck is still at the shop and they cannot identify the issue. I fear that if only the glass is replaced that this issue will reoccur.”

Several of the owners shared photos of their damaged rear back lites with NHTSA.

NHTSA does not have an open investigation of this reported issue and Ford officials had not responded at press time.