U.S. Energy Secretary Says Country on Path to Be Top Oil Producer by 2015 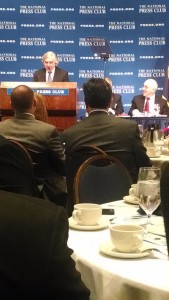 The auto industry was a hot topic of discussion for the U.S. Department of Energy Secretary Ernest Moniz during his speech at the National Press Club in Washington, D.C., yesterday. In particular, “For the first time in 20 years, we are producing more crude oil at home than we are importing,” he pointed out.

The International Energy Agency has predicted that by 2015, the U.S. will surpass Russia and Saudi Arabia as the world’s top oil producer and Moniz agreed.

Though production is up, “we continue to focus on reducing our dependence on oil,” he added, referring to a three-pronged U.S. Department of Energy (DOE) strategy.

In the first prong, he says the DOE and White House are focusing are fuel efficiency standards. The CAFÉ standards implemented during President Obama’s first term “are projected to save two million barrels of oil per day by 2025 and to save the U.S. $1.7 trillion in fuel costs.” 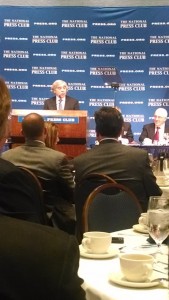 Moniz also pointed to the DOE’s ongoing commitment to the development of bio fuels. He stressed the costs of these fuels are coming down.

And while the government invests in bio fuels, it is also pushing for the electrification of vehicles.

“[T]he cost of vehicle batteries has dropped significantly in the last four or five years, but we still have a ways to go,” Moniz said.

Earlier this month, the National Highway Traffic Safety Administration announced it is beginning to take steps to allow vehicles to talk to each other to help cut down on crash occurrences.

On Tuesday, the President directed the Department of Transportation “to develop and issue the next phase of heavy and medium heavy duty vehicle fuel efficiency standards by the end of March,” Moniz said.

The U.S. Energy Secretary went on to say the government has invested in the auto industry to help automakers move to future technologies. 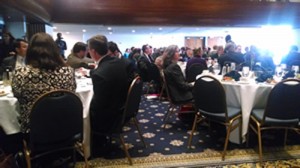 “We provided more than $8.4 billion in loans to allow domestic auto producers to retool their American factories,” he said. “This is to produce cleaner and more fuel efficient vehicles that are in increased demand at home and around the world.”

2 Responses to U.S. Energy Secretary Says Country on Path to Be Top Oil Producer by 2015