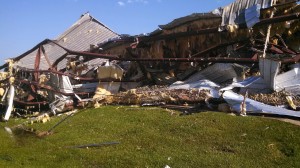 The Auto Glass Now shop in Jackson, Miss., was pretty much a total loss after being leveled by a tornado.

Employees of Auto Glass Now in Jackson, Miss., escaped just 20 minutes before a tornado leveled the automotive glass company Monday, according to regional manager John Ketchum. The shop was pretty much a total loss, but the company has already leased a new building and is back in business today, he says.

“The ladies there called me as I was on my way,” Ketchum explains. “They were concerned because the weather was getting bad and tornado alerts were being issued. They were listening to the radio but none of us realized the severity of the storm. When the alarms [warning sirens] went off, I told them to leave. About 20 minutes later the building was gone. All we could salvage was a chair.”

The employees are safe and their homes were not damaged, Ketchum adds. One manager lost both family vehicles.

“Basically, I got there and saw all the damage. I gathered everybody together and assured them they still have a job with us and they aren’t going anywhere. I was lucky to find the building. I called the owner [Tony Hakimian] and told him the extent of the damage. He said to tell everybody we were taking care of their pay for the week. We did not want them worrying. I took the employees out to dinner and Tony bought these guys new tools,” he explains.

Ketchum and the owner were able to find a new building and sign a new lease quickly.

“We are so fortunate that we found these people a new home for the business. In about an hour we had a new lease signed,” he says. “The next day the employees were back to work. We’re waiting for the phones to be hooked up and we are almost ready to do mobile repair and replacements. We have vehicles being delivered today,” Ketchum says.

The tornado that leveled the facility was part of a larger storm system that caused widespread destruction in the state.

“At least three tornados flattened homes and businesses, flipped trucks over on highways and injured an unknown number of people in Mississippi and Alabama on Monday as a massive, dangerous storm system passed over several states in the South,” according to a local report.