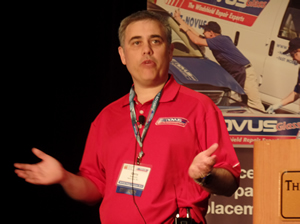 Father Allan (below) and son Garry Skidmore (above), chairman/CEO and president/COO, respectively, address franchisees at the Novus Super Session in Tucson, Ariz., today.

“We are the second largest network in this country,” said Garry Skidmore, president and CEO of TCG International, in welcoming franchisees to the Novus biennial Super Session being held in Tucson, Ariz., this week, “and we have an amazing reputation for quality and value.”

The four-day event brings franchisees and management together to discuss and preview future plans and initiatives.

“We need to differentiate ourselves. We don’t want to repair or replace glass, we want to Novus-ize it,” said Garry Skidmore.

“And we doing it right,” he added. “We are not ‘self-certifying.’ We are promoting the Auto Glass Safety Council™ (AGSC) and its independent third-party validation program. And that’s important.”

Novus is the only franchise organization that is a collective member of the AGSC. It requires its franchisees be AGSC-Registered Companies.

“We are aiming to become the dominant AGR retailer. And we are a retailer that knows repair and can help our clients save money using repair. We want to be the best,” added Garry Skidmore, who was followed by his father, Allan, who is chairman and CEO of all the Skidmore companies. 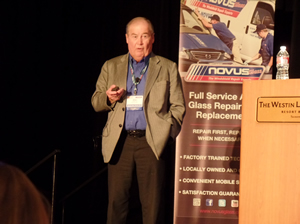 “We have promoted Garry and have now completed the succession plan for all the Skidmore companies,” Allan Skidmore said.

Allan Skidmore discussed how Novus Canada has signed a master franchise agreement with Prime CarCare to develop Novus across Canada. The Minnesota facility of Novus is also being upgraded and Novus is in the process of moving. The company should be in the building before the end of this month.

He also announced the introduction of a new, single application “green” resin for use by franchisees. “This is outstanding and it is exclusive to Novus,” he said, passing around samples to attendees.

He then announced the winners of the Novus 2013 President’s Circle:

Will and Jodi Brandt

These winners will be guests on a world class fishing trip hosted by Allan Skidmore.

1 Response to Novus Flexes Its Muscle