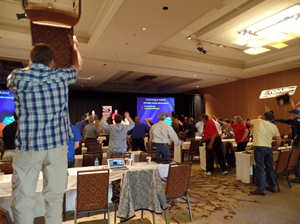 Gary Michaels of Southwestern Consulting gets Novus Franchisees to show their enthusiasm for their work during the Novus Super Session Franchisee meeting held in Tucson, Ariz., late last week.

The Novus biennial Super Session came to a close Saturday with doses of both enthusiasm and realism. The Saturday morning session began with the enthusiasm—in the form of two presentations by Gary Michaels of Southwestern Consulting, who challenged to group to be more enthusiastic about their work. “Enthusiasm is contagious,” he said, “it makes other people want to help you and makes people better than they are.”

Michaels helped franchisees put that enthusiasm into practice as he led the group in a rousing foot stomping, chair climbing cheer at the end of the session.

“We are thrilled that Novus is the first franchisor to become a collective member of AGSC,” said Levy. “This means that it has agreed that every new franchise will be an AGSC member and that is an outstanding effort on their part.”

Novus also presented its “Franchise of the Year” award to Tim and Jamie Kochakian during its anniversary dinner gala, which also celebrated the franchisor’s 42th anniversary.