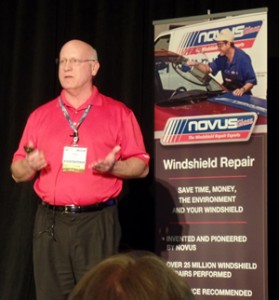 Safelite Solutions plans to introduce a new “immediate pay” program that will allow shops to receive payment faster than in the past, according to Tom Reid, director of network management for the company.

In a presentation at the Novus Super Session in Tucson, Ariz., last week, Reid said that Safelite Solutions has been testing an “immediate pay” option for in-network shops.

“If you send an invoice and it clears for payment, there will be an option to receive that payment immediately for a fee,” Reid told franchisees. “By immediately we mean before we receive payment from the insurance company, but after all the processing. It should be within 72 hours,” he added, saying the fee for the service will be 2 percent of the invoice.

Reid also discussed a small survey he said his company conducted, which asked owners of in-network shops in five states their biggest problems. “By far, the largest problem was unlicensed/unregistered shops,” he said, citing the results of the survey.

Top issues cited by those surveyed:

(More than one response was permitted).

Reid also talked about how unregulated companies are a challenge for the entire industry in such a way that it seemed to indicate a possible future agenda item for the third-party administrator (TPA) of the nation’s largest installation chain.

“When we asked the participants if they would support the regulation of auto glass businesses in their state, 74.2 percent said ‘yes,’” Reid said.

In addition to the immediate pay and regulatory issue, Reid also spoke about “enhancements” coming to the SGC network in 2014.

He said an enhanced electronic scorecard will debut that includes consolidated survey info and that the company is streamlining the parts approval process, especially for VIN etching and vehicle tinting. He mentioned that electronic dispatch through POS systems rather than fax and/or PDFs is expected to debut toward the end of the second quarter or possibly the third.

Reid also mentioned that Safelite expects automotive glass sales volume to be higher in 2014 than it was in 2013, driven mainly by weather and other factors.

He also paid homage to the 19 Novus franchisees that had Net Promoter Scores of 90 or above.

“This is an outstanding achievement,” said Reid, taking particular note of the three franchisees that had perfect scores of 100. “Some people say this is impossible but these companies show it’s not,” he added.