On a bright sunny day in St. Petersburg, Fla., John McAuley, a SuperGlass Windshield Repair franchisee, walked out of his house prepared to call on dealers, insurance customers and to take care of any immediate calls that come in for his automotive glass repair service. 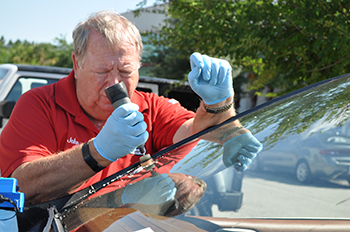 McAuley, 65, has spent 33 years in the auto business, working as a dealer, a used car manager, new car manager and auction general manager. About five years ago he turned his back on corporate life in favor of opening his own company, SuperGlass Windshield Repair of Florida’s Gulf Coast. He runs the mobile automotive glass repair business from his house and has two employees who are in-the-field technicians. In total, his business covers four counties. And not long ago, he purchased the Birmingham, Ala., franchisee rights, which he thought was advantageous because it brought in airport business. Though his Florida franchisee is close to Tampa, Fla., the Tampa airport isn’t a part of his territory. Another franchisee covers that area.

While the majority of his business is automotive, he does some architectural, doing scratch repair and buffing.

“I enjoy meeting the people the most,” he says. “Doing insurance work you meet a diverse group of people. Each repair is a challenge in itself. I enjoy looking at it and trying to figure out how I’m going to overcome the challenge.”

“With an insurance customer, I explain what they can expect before I go to work on it. We try to accommodate any customer within 48 hours,” McAuley says.

On this particular day, the first customer is a dealer. The store has sold a 2011 Jeep Grand Cherokee to a customer in Orlando, Fla., and plans to make delivery later that day. The vehicle has a small chip in the windshield that the dealer wants repaired.

All of his tools come from SuperGlass Windshield Repair. He drills a small hole in the chip and vacuums it out. Next up, he puts in the resin, being sure it fills out any legs to the chip. Once he is satisfied it is properly filled, he pulls out the curing lamp to set the resin. Finally, he polishes the spot and makes it look as close to 100 percent as possible, showing a close attention to detail. Once satisfied, he writes up the bill and moves on to the next customer.

“Our customers can count on us. If we say we can’t repair it, it can’t be done,” he says. “We know a respectable replacement company in town and if we can’t do the repair, we refer the job to them. They don’t do repairs, so if they see a windshield that doesn’t need to be replaced, they refer the repair to us.”

Does McAuley see retirement in his future? No, he describes himself as a type-A personality and says he will keep working as long as he can.

“Though I have cut back,” he says with a smile.