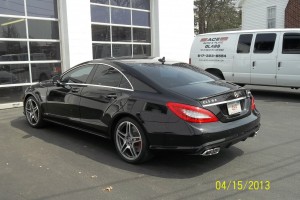 Richard Langley, a technician for Ace Auto Plate Glass in West Roxbury, Mass., was arraigned late last week on one count of murder, according to the Plymouth Assistant District Attorney Bridget Norton Middleton. Langley is accused of allegedly stabbing his wife to death and was ordered held without bail.

“On June 11, 2014 at approximately 7:36 p.m., Rockland Police received a call reporting a woman stabbed at 189 Moncrief Road in Rockland, Mass.,” according to a statement from the ADA Norton Middleton. “When police arrived at that location, they found a woman lying in the driveway suffering from an apparent stab wound. Neighbors were attending to her.

“The victim was taken to a local hospital where she was pronounced dead a short time later,” the ADA wrote in the statement. “The victim has been identified at Patricia Langley. Her husband, Richard Langley, was placed under arrest at the scene and charged with murder. They both lived at 189 Moncrief Road.”

The person who answered the phone at Ace Auto Plate Glass said the company is not commenting on the situation. The company’s website lists Rick Langley as general manager. There are several photos posted to the company’s Facebook account showing vehicles upon which Langley apparently worked.

“This matter remains under investigation by the state police detectives assigned to the Plymouth County District Attorney’s Office and the Rockland Police. No further information is being released at this time,” according to the ADA.

Langley allegedly told police he killed his wife for cheating, according to a local report.

As she lay dying, Patricia Langley allegedly identified her husband as her killer, the report notes.

His next court date is July 11, 2014 for a probable cause hearing in Hingham District Court in Massachusetts.