It appears a large number of AGRR companies will be closed Friday and Saturday in celebration of Independence Day in the United States, but shop owners expect business demand to climb early next week as Fourth of July travelers return home. And one shop owner in Wilmington, N.C., says Tropical Storm Arthur will ramp up business even more. He is already seeing hail and strong winds today.

“The storm [Tropical Storm Arthur] has just started hitting us. We’re seeing hail and wind. It’s pouring out there. We’re ready for the demand from it,” says TJ Barron of Register’s Auto Glass.

As for Saturday, July 5th, his company will be closed, but he’ll have a technician on call.

Ryan’s Auto Glass in Pittsburgh, Pa., will also be closed on Saturday.

“But we’re already pretty booked up on Monday so we expect an increase from travelers,” says the customer service representative who answered the phone.

City Auto Glass, headquartered in Saint Paul, Minn., will be giving technicians the day off on Saturday.

“But we have trained customer service representatives who can service claims and book jobs,” says George Weller, operations manager for the company.

Glass Services in Shreveport, La., will be closed Saturday. 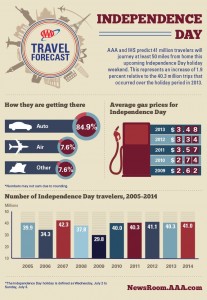 AAA Travel projects 41 million Americans will travel 50 miles or more from home this Independence Day, up 1.9 percent from the 40.3 million people who traveled last year. This is also up 14 percent compared to the Memorial Day weekend.

More than eight in 10 (34.8 million) are expected to drive to their destination. This is the highest level since 2007, according to AAA.

The majority of U.S. travelers will likely pay the highest gas prices for Independence Day since 2008, according to AAA.

“In recent years gas prices have declined in the weeks leading up to Independence Day, but this has not occurred this summer due to higher crude oil costs as fighting intensifies in Iraq,” according to the AAA statement.