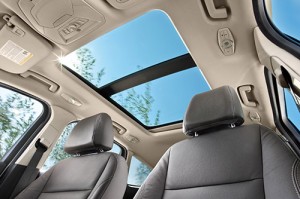 A 2014 model-year Escape with a panorama sunroof.

Ford has issued a safety recall for select 2014 model-year Escapes for a “potential issue with panorama roof glass that may have an improperly cured urethane bond between the glass and the attaching bracket.”

“A panorama roof glass assembly with an improperly cured urethane bond may result in noise, water leak or separation of the glass panel from the vehicle, potentially increasing the risk of an accident or injury,” according to Ford’s statement.

If an automotive glass repair or replacement company gets a call regarding this issue, the shops owners should direct the consumer to call their local Ford dealer.

“The recall repair has to be done at a Ford dealership,” says Kelli Felker, safety communications manager at Ford.

She said the company does not discuss supplier involvement and declined to release the name of the urethane manufacturer.

No accidents or injuries have been attributed to this situation, Ford’s statement notes.

The National Highway Traffic Safety Administrator (NHTSA) has not yet reported on this recall at press time.

“Dealers will replace the front roof glass panel if the date and sequence number located on the glass label fall within the suspect build range,” according to Ford. “Affected vehicles include certain 2014 Ford Escape vehicles built October 15, 2013 to October 22, 2013 at the Louisville Assembly Plant. As of June 23, 2014, approximately 1,870 [vehicles] are in the U.S. and federalized territories (actual 1,867). Approximately 140 (actual 143) are in Canada and approximately 115 (actual 114) are in Mexico.”