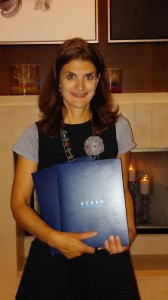 Tara Taffera accepts the award for both publications at the ASBPE awards in Chicago.

Door and Window Market Magazine (DWM) took home the gold for best news video in the national American Society of Business Publication Editors’ (ASBPE) awards, affectionately known as the Azbee awards. The FILM’d video newscast, produced by WINDOW FILM magazine, took home the silver for best webcast. The awards were received during an Awards Banquet and Ceremony July 25 in Chicago.

DWM editor/publisher Tara Taffera and video producer Chris Bunn were recognized for their video profiling the hurricane and tornado research being conducted at the University of Florida, and the impact this will have on the door and window industry. The pair spent a day at the university last summer with Dr. Forrest Masters, university researcher and Henry Upjohn, CEO of Special-Lite Inc. The two developed a machine that can test building products and simulate a category 5 hurricane or an E4 tornado.

“I am very proud of this award,” says Taffera. “Chris and I really spent a lot of time and effort in making sure the industry could visualize the important research being done here and we were proud of the result. To have our efforts recognized by the ASBPE’s is a great honor.”

The FILM’d video newscast, produced by WINDOW FILM magazine, took home the silver for best webcast and this is the third straight year the magazine was a finalist in this category. Video producer Chris Bunn and editor Casey Neeley were recognized for their efforts.

“We are so pleased to receive silver award and the nomination as a finalist for the national award for the third year in a row,” says Debra Levy publisher of WINDOW FILM. “The staff, including our editorial director Tara Taffera, put a great deal of work into providing this newscast for our industry, so it is nice to see our efforts recognized.”

Taffera was on hand to accept the honor, along with associate publisher Lisa Naugle.

“I too am proud of our staff and we are pleased to be able to bring this high caliber video series to our readers,” adds Taffera.

The national award is incredibly competitive as entrants are compared against publications from New York, Atlanta, Washington, D.C., and across the country.

To view the winning DWM newscast, visit this episode in the magazine’s studio.

To view an example of the FILM’d newscast visit WINDOW FILM magazine’s studio at www.windowfilmmag.com/category/studio/.