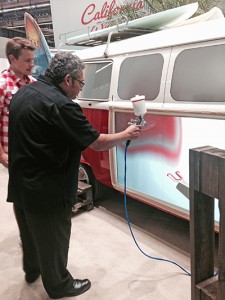 Gilbert Gutierrez of Equalizer works on his painting skills during Automechanika Frankfurt.

More than 4,600 companies from 71 countries showed off their products and services to approximately 140,000 international trade visitors during this year’s Automechanika Frankfurt held September 16-20, 2014. While attendance for the AGRR sector appeared down, the “quality of leads was better,” according to Henri Goudsmit of Ameritech.

“All the usual exhibitors from previous years were present and the general consensus was that the attendance for people in auto glass was a little down versus 2012, but the quality of leads was good,” says Goudsmit.

“We were at Automechanika but did not exhibit,” says Shauna Davis, sales and marketing manager for Equalizer. “We only attended to support our international distributors. In our opinion, the show’s attendance had decreased from previous years. There are 11 halls and only three could apply to our industry. There were a lot of live demonstrations with prospective customer involvement and a lot of booth-style meetings during show hours.” 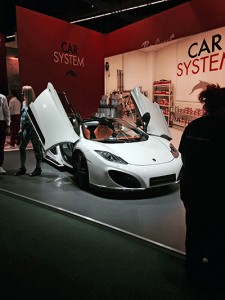 A car on display at Automechanika. (Photos’ source: Equalizer)

“Many don’t get to come over to the states so this is a great opportunity to spend some time with them,” he notes.

“I received a mix bag of comments,” he adds. “One distributor said it seemed a bit off this year, but that was only Wednesday. I noticed myself that traffic was lower than expected on Wednesday, but Thursday was quite busy. In my opinion, it was the busiest day. Friday seemed somewhere between the two. I left Saturday morning and I didn’t see Tuesday.

“A few of my distributors that had booths were very happy with the show and had many visitors,” he continues. “… I’m not sure if it’s because I’ve been there so many times, but I didn’t think it was that exciting this year. … Past years seemed more exciting and upbeat, but I missed the last one in 2012.”

“We were not an exhibitor,” points out Bob Birkhauser of Aegis Tools International.

“The first day was modest in terms of attendance, but there were still a lot of people in the aisles. The second and third days were packed with people. Historically, there is usually about 160,000 in attendance,” Birkhauser says.

The next Automechanika Frankfurt will be held from September 13-17, 2016.