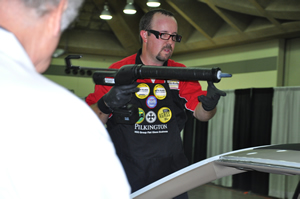 Lewis, 36, the manager of Techna Glass in Salt Lake City, takes home the grand prize of $10,000. He has 18 years of experience. He and his wife, Candace, have seven children, Justine, Skyler, Kasen, Paislee, Daisey, Kayla and Jamin. 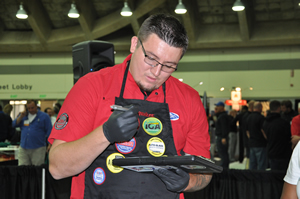 Mark Browning of Glasspro in Goose Creek, S.C., came in second in the AGTO, and Sam Shipley of Maryland Auto Glass in Biglerville, Pa., came in third.

Braulio Lopez of Cristalbox in Lugo, Spain, took second in the WRO, and Robert Rask of IntegraGlass in Orem, Utah, took third.

The winners were announced this afternoon in Baltimore at a Gala Awards Reception and Ceremony, which concluded Auto Glass Week™. Stay tuned to glassBYTEs.com™ for interviews with the winners and more from the event.

This entry was posted in glassBYTEs Headlines and tagged Auto Glass Week. Bookmark the permalink.