How Did We Get the Anti-Steering Law Passed? 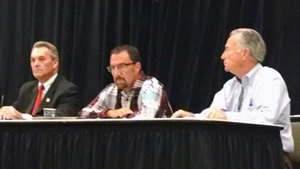 Left to right: Jim Amann, Mark Vece and Mario Ercoloni discussed the recent passage of an anti-steering law in Connecticut.

In a panel reviewing legal issues in the automotive glass industry, Jim Amman, former Connecticut Speaker of the House; Mario Ercolini, general manager of branch operations for Wholesale Glass Distributors; and Mark Vece, president of The Whalley Glass Co., discussed the efforts by independent glass companies to get legislation passed on a state level to “prevent steering” by large third-party administrators (TPAs). The panel was held as part of Auto Glass Week™, taking place this week in Baltimore.

Stuart Zimmerman, a former journalist and attorney/advisor for U.S. Department of Justice, who currently works as an information technology consultant, moderated the panel. He covered the legal battle over an Act Concerning Automotive Glass Work in Connecticut for glassBYTEs.com™.

The panelists all agree that the way to get a bill passed through state assembly is to mobilize fellow glass company owners to visit and call state representatives and senators.

“My Dad has been in the business since the 1950s,” said Vece. “I’ve been able to get to know most of the glass shops in Connecticut. I know almost all of the installers. We were actively involved in trying to get all the glass shops involved [to get a state law passed]. You have to be very proactive and you have to make the calls to the glass shops and convince them. … You really have to get them to show up. You have to have a lot of patience. Ours also did not come out the way we wanted when we started. Our law took three years to get passed. It takes a lot of effort. Get everybody you can involved in it. The bill [An Act Concerning Automotive Glass Work] did pass and went into effect January 1.”

However, Safelite Group and Safelite Solutions challenged part of the new law and received a preliminary injunction to halt enforcement at the Circuit Court level.

“I was hired by Connecticut Independent Glass Association,” Amann explained. “My challenge was to face what we thought was an unfair practice. … There were many lobbyists representing the insurance industry but we were able to beat them [and get a law passed addressing steering]; however the law was immediately challenged by Safelite. Recently, unfortunately, we lost that case in the first round. The attorney general can appeal that decision but he hasn’t done that yet. We believe the judges [at the Circuit Court of Appeals] got it wrong.”

“The state can regulate the insurer or TPA … but we just can’t tell them what they can say. The judge gave us a good idea of what we need to do for next legislative session,” he added.

The work is already underway on a new bill, Amann told attendees.

“Drafting legislation for 2015 legislative session has begun. We want to level playing field. … The Connecticut legislature is on the side of the independent glass shop. They are not happy that they’ve been sued and that we lost the last round,” he pointed out.

Ercolini played a big role in getting similar legislation passed in South Carolina. He said he was fortunate the company he worked for at the time included working on the bill as a part of his daily duties. He visited the state capital every Wednesday to talk to representatives and senators.

“We went before the banking and insurance committee and we brought 170 people to the meeting. They kicked it around for about an hour and then postponed it until the next week. … We came again and this time we brought another 120. I was acting very much like a lobbyist. … Every Wednesday I was at state capital talking to senators. Six months of work and I’m hearing it’s dead,” he explained.

“They [state senators] were telling me we can’t do this and we can’t do that. … They wanted a bill the insurers could get behind. The one we got passed includes no steering. However, TPAs can still refer [their sister company]. They now also have to ask if you have a shop of preference. If someone says yes and gives a name, then that is it. That is who they get,” Ercolini said.

2 Responses to How Did We Get the Anti-Steering Law Passed?