How to Gain Quality Referrals 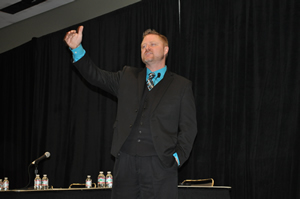 Bill Lane of the Referral Institute in Arizona addressed how to gain the right referrals the right way.

Bill Lane, owner of the Referral Institute of Arizona, joined Auto Glass Week™ to kick off the second day with a session titled “Gaining Quality Referrals.”

He began with talking about referral marketing, dispelling myths that word-of-mouth referrals are not measurable.

“There’s a science to this. There’s a way to get consistent word of mouth referrals,” Lane said.

He said he received leadership from his father who was the “entrepreneur type” and caretaker mentality from his mom – which helped lead him to the networking expert he is today. His passion is for people to have the right information at the right time.

In his late 20s and early 30s, he owned an insurance company and was “all about the money.” After his mom passed away, he said he realized that was an empty pursuit.

“I realized in my life, my networking, my business, I was not being caring or empathetic in any way,” he said. “At that time, someone asked me to be the president of my networking group. I knew that I had a chance to honor my mother’s memory by giving back and helping other people grew.”

He said when he focused on helping other businesses grow, it was the most powerful year of his life.

During that year, when he stopped focusing on his business and focused on others, it also was the most successful year his business had ever experienced.

Soon after, he became the owner of the Referral Institute of Arizona.

He went on to describe the difference between referral marketing and sales.

“Marketing is about creating opportunity. Sales is about asking for money,” he said. “There’s a 300 percent increase when you get a referral than when you get a lead. It’s creating a sphere of influence the right way.”

Lane continued to describe three types of customers. He said 30 percent of people just say “no” to your business, three percent are active seekers – they are looking for the highest value and lowest price. “These are the types of people who will call a number on a billboard. There are billions of dollars spent this way and yet it only covers three percent,” he said.

Then there is the 67 percent. “They are the ones who are either unconscious to the need – they don’t know what their needs are or they’re in denial or procrastinating. Those types don’t like to get sold to – they naturally back away,” he said.

He said he used to hand out his card and go for the sale right away. “When I shifted that mentality and served those businesses, they were inspired to ‘work’ for me,” he said. “Everyone in this person has the network to do that.”

He then went on to explain four different categorizations people fall into and how they’re each important to networking.

1)     Go-getters. “Go-getters are enterprising. They like results and like to get down to business right away,” Lane said. “They believe in, ‘it’s easier to ask forgiveness than to ask permission.’”

2)     Promoters. “Promoters actively seek others. They love the bar and are your public speakers,” Lane said. “They have ‘squirrel’ syndrome and will focus on the next person to come in the room.”

3)     Nurturers. “They’re my manners people,” he said. According to Lane, nurturers have the hardest time saying ‘no,’ which eventually builds up resentment. Their main focus is to help others grow so they “give and give and give.”

4)     Examiners. Lane said examiners will be taking things in and will always create a barrier. They are the person that when you shake their hand, they kind of pull back a little bit. They’ll be the first group to complain about the “close-talker.” When it comes to their dress, it’s usually higher-end but more common.

Though very different, Lane expressed it is essential for the four groups to work together in networking.

Auto Glass Week™ concludes today. Stay tuned to www.glassBYTEs.com™ for the latest from the event.