J.D. Power and Associates has issued its 2014 U.S. Auto Claims Satisfaction Study. Coming in first on its list for satisfaction is Amica Mutual.

On a 1,000-point scale, customer satisfaction with the claims experience for physical damage loss has grown to 857 in 2014 from 842 in 2010, according to J.D. Power. Amica grabbed the top spot in terms of customer satisfaction with a score of 900, while Auto-Owners Insurance (879) and State Farm (869) took home second and third place, respectively.

“We’re very proud as a company to be recognized by J.D. Power with this award,” says Tony Noviello, a vice president with Amica’s claims department. “Our entire workforce contributed to this award. We focus on our workflows and that helps to make our workflows more informative and easier for the customer. We look at all the different areas that J.D. Power takes into account. We apply the same philosophy to all the different touch points that J.D. Power focuses on.”

The company’s advertising may “appear louder in certain markets,” according to Vince Burke, a company spokesperson. Amica appears to have increased its advertising presence, particularly in the Washington, D.C., market. Burke says the company focuses on certain target markets, such as D.C.

“Insurance companies are placing more emphasis on training their employees and representatives to be customer-centric, especially during the interaction process,” says Jeremy Bowler, senior director of the global insurance practice at J.D. Power. “That focus is reflected in the increase in satisfaction, specifically with claim professionals, whose primary responsibility is to accurately estimate the amount of the insurance settlement. Historically, those individuals have been recruited and trained for their technical knowledge but haven’t always been known for being customer service-oriented.”

USAA achieved a score of 896, but is only open to U.S. military personnel and their families, J.D. Power noted.

The 2014 U.S. Auto Claims Satisfaction Study was based on responses from 10,891 auto insurance customers who settled a claim within the past six months. The study excludes claimants whose vehicle incurred only glass/windshield damage or was stolen, or who only filed roadside assistance claims, according to officials. 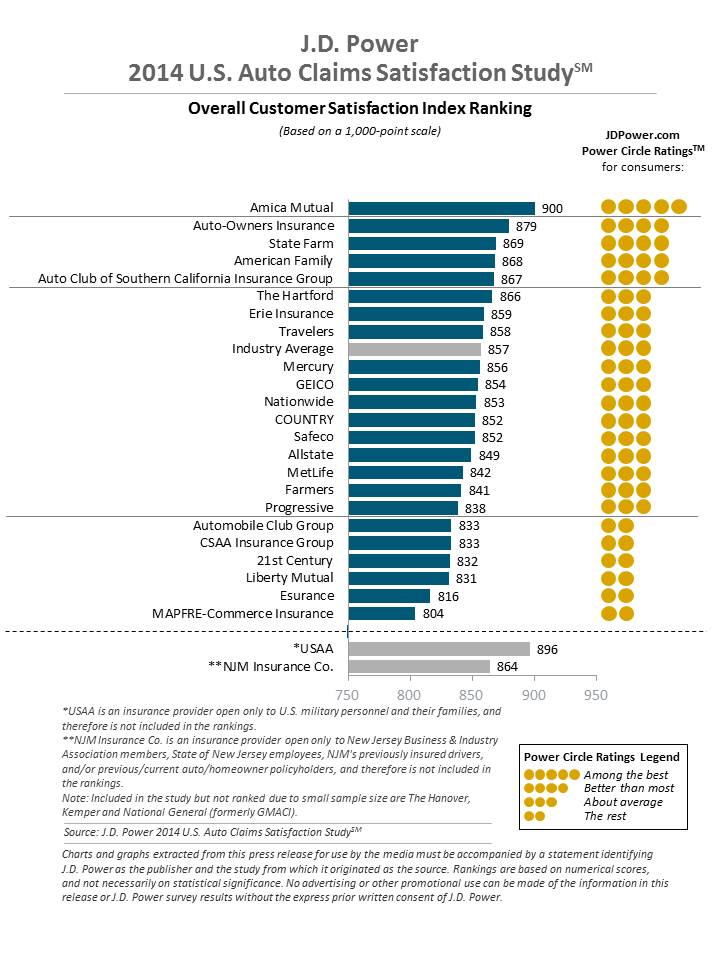