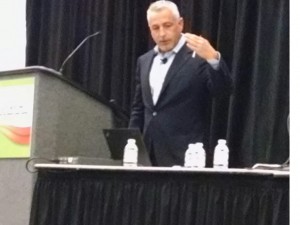 Tony Aquila, CEO of Solera Holdings, parent company to LYNX Services, GTS and Glaxis, provided an overview of where the consumer-auto interface is going and offered a few insights on the automotive glass industry during his keynote address at Auto Glass Week in Baltimore this morning. “I want to talk about you and what we are going through as an industry,” said Aquila, “I’d like you to open your mind a bit.”

And the technology Aquila showcased before the packed audience was mind-boggling. The CEO, who began his career by sweeping floors in his uncle’s body shop, said he understood what most small business owners go through. “I remember worrying all day Thursday and Friday if the paychecks were going to clear,” said Aquila to the knowing laughs in the group as he turned the discussion to technology.

“Technology is the boogie man today,” he explained. “The way we do almost everything we do today is going to change.”

“I know you think prices are shrinking and, from a margin perspective, you’re right,” Aquila noted. “The average age of the vehicle has increased two years. This is not just U.S. phenomenon, it is a global phenomenon and that’s good for us.”

Aquila explained why the Insurance & Services Division of PGW was attractive a global powerhouse like Solera.  “Glass is like gold,” he said, recalling his start in the glass business many years ago. “This is the best business we could ever go into.” Even though glass claims are not high-ticket items, they are on the first line of credibility for insurers and that makes them very important– them and us.”

In 10-12 years, glass will become an intelligent object, Aquila said.

He then showed aninnovate video detailing how the car of the future will be purchased, delivered, maintained, fixed when broken and how claims will be filed. The video seemed a collective “light bulb” moment for the audience members who sat in complete stunned silence at what was coming in the future.

There are autonomous aspects coming into the car. These aspects focus mainly on technology that kicks in at 45 miles per hour. There will be adaptive technology for older cars, he added.

“We think the impact of autonomous [driving] technology by the year 2020 will be about 7 percent and we have to make that up in ways,” he said, noting that autonomous driving technology could reduce insurance claims.

Aquila did not shy away from giving his views on some of the industry’s hotbed issues. Specifically;

“With the coming changes in technology … it no longer make sense to be a part of a glass network or a collision network,” he said. “ … Solera thinks there should be an open, diverse network. We think the vertical, sole network will die. The new digital generation wants more transparency across entire asset line,” he said.

And, in what many would consider a comment aimed directly at NAGS, he admonished the industry for an outdated pricing model and list prices. “If I had a product that sold for one million dollars, but told you that I could give you a discount and give it to you for $300,000, would you think that was realistic?” he said, “we have to have a structure that makes sense and is credible.”

“Many people say it is a dead industry,” he continued.  “I think it’s the opposite –I believe it’s about the come to life. … We have no intention of ever installing one piece of glass. But you have got to do your part. I’ve made a living out of doing things nobody else wanted to do and I’m proud of that. … You are not going away; however, [your business] is going to change,” he said.