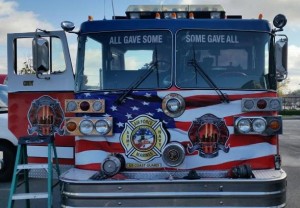 Ron Neely, a retired Nashville firefighter with 24 years of service, purchased and restored a Patriot Guard Stuphen fire engine in honor of the fallen in September 11, 2001.

A pair of custom windshields were donated by Guardian’s Custom Glass Solutions to help a retired Nashville firefighter refurbish a Patriot Guard Stuphen fire engine. The fire truck will roll down the streets of Nashville tomorrow at the annual Nashville Veteran’s Parade to honor “the memories of the fallen firefighters and rescue workers from the events of September 11, 2001.”

Ron Neely, a retired Nashville firefighter with 24 years of service, purchased and restored the truck.

“We were touched by his cause and wanted to do something to help,” says Debi Owens, Custom Glass Solutions’ sales manager.

The windshields feature the saying “All Gave Some/Some Gave All,” which is laminated into to the glass.

They were presented and installed with the help of Lawrence Glass Co. of Murfreesboro, Tenn.

“We’ve always supported our men and women in uniform and were compelled to help in any way possible when we heard Ron’s story,” says Dale Lawrence of the Lawrence Glass Co.

Neely will showcase his fire truck during other parades throughout the country as well.

“I am really touched by what Custom Glass Solutions has done and I can’t thank them enough,” he says.