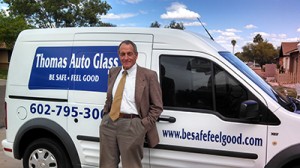 Frank Thomas, owner of Thomas Auto Glass in Phoenix, began his mission of giving after his first-born son died of cancer at the age of three in 1975. During the fight to save the boy, Thomas says he received “overwhelming assistance from many people and organizations,” which he wanted to pass on.

“To experience so much help when you feel so helpless is just a wonderful thing,” he says.

Beneficiaries of his work have included the Crisis Nursery children’s shelter in Phoenix, Wounded Warriors, March of Dimes and United Cerebral Palsy.

Last year, his golf tournament for the 19 hotshot firefighters who died in the summer fires in northern Arizona raised more than $50,000.

Thomas was recently honored by Angels in the Neighborhood for his charity work.

Thomas says he doesn’t keep score of the money he’s raised, but it is estimated in the millions of dollars. His events brought in $580,000 for the Crisis Nursery alone.

“The important thing is to do, not just feel,” he says.

The theme of his business is “Be Safe, Feel Good.” When his customers have work done at Thomas Auto Glass, the business donates $50 to the charity of their choice.