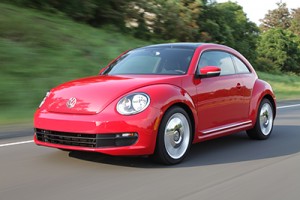 Volkswagen is recalling certain model year 2013-2015 Beetle vehicles manufactured June 13, 2013, to July 3, 2014, reporting that “the glass sunroofs in the affected vehicles may break when the vehicles are operated over a hard road surface or strike a pothole.”

“Due to a production process issue at the sunroof glass supplier, some vehicles may have been built with a panoramic sunroof glass panel with a steel frame that may have been manufactured out of tolerance,” according to VW’s report. “As this manufacturing issue could cause additional stress to the glass panel, the glass panel may be susceptible breakage if the vehicle experiences a sudden jolt, such as when hitting a large bump or pothole in the road—especially in cold temperatures. Usage of certain de-icing salts also has been identified as a contributing factor.”

The sunroof manufacturer was not identified in the report and VW officials had not yet responded to a request for comment at press time. VW identified the replacement part as 5C5 877 071 B in the recall report.

“Vehicle occupants could be injured by falling glass,” according to VW. “A sunroof break during vehicle operation also increases the risk of driver distraction and a resulting vehicle crash.”

Until the sunroof has been replaced, VW recommends that owners keep the sunroof shade fully closed.

The automaker will notify owners and dealers will replace the sunroof free of charge. VW intends start its recall campaign on or about December 19, 2014. VW’s number for this recall is 60B9 for dealers.