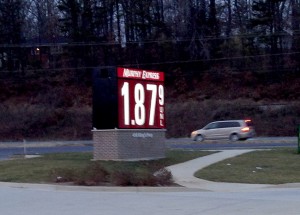 Gas prices have plummeted to an average of $2.05 throughout the nation, according to AAA. In Arizona, Michigan and Minnesota, AGRR company owners report a gallon of gas is below $2. “There is a lot more traffic in the Phoenix area, which has helped business,” says Frank Thomas of Thomas Auto Glass.

But he also calls Phoenix the “epicenter for the universe” right now. Between the upcoming Super Bowl to be held at the University of Phoenix Stadium, two recent classic car auctions and general tourists, business is up. Thomas has seen gas as low as $1.69 a gallon.

“The first couple weeks of January are traditionally slow … but from all activity we’ve had, it hasn’t indicated a slow start for the year,” he says.

And the weather is a “beautiful 77 degrees.”

“You can actually do a windshield repair without turning on defroster,” Thomas says.

In Michigan, the lower gas prices “really help financially,” says Linda Ellsworth, owner of Flash Glass LLC in South Lyon, which is just outside of Detroit.

“It certainly helps our business. We don’t get paid fuel support,” she points out.

Her technicians do all mobile work, so while gas prices hover around an average of $1.86 per gallon, which is a benefit, the weather plays a big factor in her business, as well.

“I keep an eye on the temperature,” she says. “We have been rescheduling our jobs if it’s 26 degrees or below. We will not do an install below 26 degrees. We are family business. We just want to do the job correctly and safely.”

So for the past two weeks, she said it’s been slow since it’s been so cold.

In Perham, Minn., gas prices come in at about $1.90 per gallon, but the owner of Visions Glass isn’t seeing a big benefit.

“It doesn’t really affect us a lot,” says Clyde Stephens. “We are not mobile-only. We have a storefront. Low gas prices help the bottom line and help drive the economy, but we don’t rely upon mobile for the majority of our work.”

The bigger impact on his business is the shape of the road system, he points out.

“With gas prices being better, driving will increase a bit. But I’m kind of in a rural area. In rural Minnesota the roads are not in great shape. The roads are getting worse and worse across the country. … That contributes to a lot more rocks flying and glass damage.”

How cheap are gas prices in your area? Are they helping your business? Share your story by emailing jreed@glass.com or share it on the glassBYTEs.com™/AGRR™ magazine forum here.