D’Ieteren: Belron’s AGRR Jobs Down in First Quarter, New CFO on Board

D’Ieteren today reported the company’s first quarter 2015 results. The publicly traded Belguim-based owner of Belron, (the parent of Safelite AutoGlass in the United States) reported that the number of automotive glass repair or replacement jobs it completed worldwide were down 4 percent to 2.6 million. Organic growth for the first quarter this year was flat with only a .9 percent increase over the same period in 2014. Total first quarter 2015 sales for Belron are 10.2 percent higher than the prior year, mostly due to currency exchange rates. The 10.2 percent growth included the 0.9 percent of organic growth, 0.2 percent from acquisitions and 10.1 percent from positive currency translation effect. This was partially offset by a 1.0 percent decline due to one less trading day in the first quarter of 2015 than in 2014. 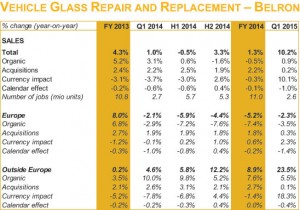 In the regions outside of Europe, sales growth reached 23.5 percent for the quarter, consisting of 5.5 percent organic increase, 0.1 percent growth from acquisitions and an 18.3-percent positive translation effect, which was partially offset by a 0.4-percent decline due to trading days.

“The organic growth primarily reflects a slight pick-up in market growth and share gains in the United States compared to the difficulties experienced during the winter of 2014 when huge spikes in demand led to glass shortages while putting strain on Safelite AutoGlass’ call centers, technicians and supply chain,” according to the company’s report.

“This year, Safelite AutoGlass was well-positioned to benefit from harsh winter conditions thanks to a 10-percent rise (year-on-year) in headcount and additional glass inventories,” the company reports.

Looking outside of the U.S., sales were down in China following closure of 31 out of 39 branches. The loss of two sizeable but unprofitable contracts last year in Brazil also resulted in lower sales, according to the company.

First-quarter sales were 2.3 percent lower than last year in Europe, consisting of a 3.5-percent organic decrease and a 1.4-percent decline due to trading days partially offset by 0.3 percent growth from acquisitions and a 2.3 percent positive translation effect.

“The organic sales decrease primarily reflects market declines in all major countries,” according to the company. “

The discontinuation of the automotive glass repair and replacement business for heavy commercial vehicles in Germany, and a decision by an Italian insurer to set up its own network to fulfill glass claims, also negatively impacted organic sales growth, according to officials.

After an annual review of goodwill and intangible assets by D’Ieteren, it reported a non-cash impairment charge for Belron of $121.9 million USD (€98 Euros) in mid-December 2014, which was “necessary in relation to the activities of Belron in the United Kingdom and in China” according to officials.

The restructuring actions in China and Germany have been completed, according to the company.

“The changes to the operating model in the U.K. are underway and are expected to be completed by the half year. The Dutch and Italian changes are largely complete,” according to the report.

The company expects moderate organic sales growth for the rest of the year “due to the continuing adverse underlying market trends.”

The board of directors of D’Ieteren has named Arnaud Laviolette as chief financial officer of the D’Ieteren group, effective September 1, 2015.

Laviolette, 54, holds a degree in economic science from ICHEC (1983) and a Master in Management, specializing in finance from the Université Catholique de Louvain (1985).

He worked at Caisse Privée Banque as financial analyst, then as M&A manager (1988-1996), before moving to ING Belgium in 1996, where he headed the Investment Banking division from 2000 to 2009. He then became head of corporate clients in 2009 and joined the management board and the board of directors of ING Belgium in 2011, where he was responsible for the commercial banking activities. Laviolette joined the Groupe Bruxelles Lambert in 2013 as director of investments.

“I am delighted that Arnaud Laviolette is joining D’Ieteren as CFO,” says Axel Miller, D’Ieteren’s CEO. “The professional path he has followed so far, his experience, expertise and personality will be an important contribution to the ongoing reinforcement of our teams with a view to fulfilling our core missions: to find a new activity for the group, to strengthen D’Ieteren Auto’s leadership on the Belgian market and to support the development of Belron in vehicle glass repair and replacement worldwide. His appointment will also allow us to rise to the challenges we face and to create value for all stakeholders concerned.”

1 Response to D’Ieteren: Belron’s AGRR Jobs Down in First Quarter, New CFO on Board