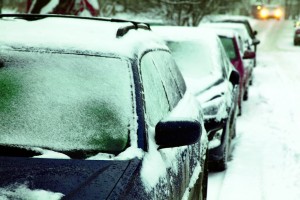 In some neighborhoods the hail was so bad in Denver last week that snow plows had to help clear the streets. “My house got hit and two of my cars were damaged as well as my camper,” says Mike Brown, a Novus Glass franchisee in Longmont, Colo. “And we were just on the fringe of it.”

“Right now, we’re no busier than normal, but I think the community is still assessing the damage. A lot of it will work its way through the insurance system and to the body shops and so forth. It will get to us,” he adds. “It’s just been a real mess. This type of weather is not uncommon for our area.”

“We’ve been getting a lot of calls,” says Munger. “They are coming in for estimates. We can’t even accommodate them all right at this time. We are hoping the insurance companies will set up sites to do estimates, but so far that hasn’t happened. A lot of people are dropping their vehicles off here as they are unsafe to drive with broken glass. Most have been understanding that we just can’t handle it all.”

“It’s heart wrenching,” adds Jessica Marble, the front office manager of Slade Glass in Longmont, Colo. “We’re trying to do the best we can with prices. Not charging for everything. We’re busy anyway because it’s the beginning of summer. We don’t do automotive glass anymore, but we still get calls for it and I haven’t gotten any yet. I think most people are still working with their insurance companies to figure things out.”

“Up to 4 feet of ice buried all the territory between Dakota and Alaska—streets, that is,” according to one report.

“It’s a very interesting phenomenon,” says Cari Bowen, meteorologist for the National Weather Service in Boulder, according to the report. “We saw the storm stall. It produced copious amounts of hail in one small area. It’s a meteorological thing.”