This State is Giving Driverless Vehicles a Head Start

On the East Coast, Interstate 95 is perhaps most famous for its awful traffic conditions. A state with a large percentage of those woes, however, is attempting to soothe the pain with driverless vehicle corridors.

Virginia unveiled its new initiative, the Virginia Automated Corridors (VAC), in partnership with a variety of stakeholders in response to Governor McAuliffe’s proclamation to support driverless vehicles. 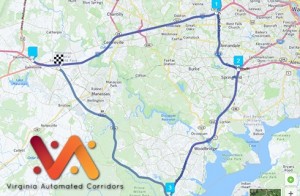 The Virginia Automated Corridors will be on some of Virginia’s busiest roadways.

“The Commonwealth of Virginia is on the cusp of the next revolution in the automobile industry with automated and autonomous vehicles,” McAuliffe says, stressing Virginia is “in a position to be a leader in welcoming, supporting and developing the automated vehicle industry.”

The new corridors will feature more than 70 miles of interstates and arterials in the Northern Virginia region, including Interstates 95, 495 and 66 as well as state routes 29 and 50.

“These roadways compose one of the most congested corridors in the U.S., with multiple transportation challenges that could be mitigated through the use of automation, including congestion,” reads a release put out by the Virginia Tech Transportation Institute (VTTI). The corridors also include two test-track environments: the Virginia Smart Road, located on-site at VTTI; and the Virginia International Raceway.

The VAC will include access to high-occupancy toll lanes on I-495 and I-95, high-definition mapping capabilities, real-time traffic and incidents, intelligent routing and location cloud technology.

“Next-generation vehicle technologies can help transform our transportation system, from enhancing safety to supporting driver convenience,” says Tom Dingus, director of VTTI. “Our goal with the Virginia Automated Corridors is to ensure automated-vehicle developers and suppliers have access to both a robust roadway environment and significant research support to create, test, and deploy systems that are beneficial to users.”

It is believed that the VAC will help facilitate the use of state roads and test facilities for automated-vehicle testing, certification and migration towards deployment. Automated-vehicle stakeholders testing in Virginia are not required to obtain a bond and licensing and insurance will be provided through the Commonwealth.

AGRR/glassBYTEs.com editor Jenna Reed attended a recent demonstration of and press event for the driverless cars. Stay tuned for a full report on that in the coming days.