What Will the Autonomous Future Bring? 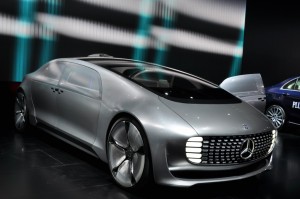 The Mercedes-Benz F 015 Luxury in Motion driverless vehicle at the Detroit Auto Show.

The future relationship between glass and autonomous vehicles may appear murky. “Windows won’t be necessary when there’s no human inside who needs to see to pick a path,” writes Peter Wayner for The Atlantic. Doron Levin of Fortune asks, “What about the snow?” With new articles coming out each day on driverless vehicles, it may be hard to know what to expect. So what do AGRR industry veterans think?

Contrary to what Wayner writes in his blog, windshields seem likely to stick around, according to George Weller, operations manager for City Auto Glass in St. Paul, Minn.

“Consumers will absolutely prefer the stimulus of the view of an outdoor environment to the view of the inside of a travel pod,” he explains.

“I would want windows because I would like to see where we are going and if we are in any danger,” he says. “After these [driverless vehicles] are out for a while and the younger people who are more into devices (smartphones, tablets et al), probably won’t care about windows. I’ll always need a windshield and steering wheel.”

As the Fortune writer points out, weather and snow, in particular, could impact the effectiveness of driverless systems.

“Obviously anything that blocks the cameras or laser, including snow, mud, bugs, or any number of things, will compromise the ability of the driverless system to operate correctly,” says VanWyk. “Not to mention any mechanical and technological breakdowns. I’m sure these are all considered in the development of these vehicles.”

Weller predicts humans will retain the ability to step in take over control from the computer for years to come.

“With current technologies, whether it be camera, radar or even a GPS-controlled system, I think that there will still be a need for the vehicle to be controlled by a human under some circumstances,” he says.

“Weather and road construction both would appear to be major obstacles to a fully autonomous vehicle for all three technologies. Not to mention our desire to maintain our freedom to roam without having to reprogram our vehicle’s direction on a whim,” he adds. “I do not want to have to tell my car to turn left or right every few seconds or minutes while I am on a carefree drive to look at Christmas lights. … I also do not want to buy one vehicle that is autonomous for my commute and another for my leisure driving. A hybrid system seems to make the most sense.”

The Driverless Impact on the AGRR Industry

The near-term impact of autonomous vehicles is unlikely to disrupt the demand for vehicle glass; however, it could impact the AGRR industry in other ways according to VanWyk.

“Glass is being specialized by the manufacturers to keep all of the business in-house and that’s what I see in the future. No mobile installations. Cars will have to go into dealers and they, in turn, will have to have trained glass technicians. It should be very interesting to see how this develops with the insurance companies, body shops and big auto glass retailers.”

Given that vehicle windows will still be made of glass for the next 10 to 30 years, there will still be a market for AGRR, Weller opines.

“There will always be factors, natural and unnatural, that cause abrasions or impact glass (such as collisions, airborne debris, birds and vandalism). I believe that the future of the AGRR industry is as bright as it has ever been for companies that remain relevant and evolve along with the advances in automotive technology. We are a long, long way from the Jetsons!”

Perhaps it is not something to worry about just yet, says Tommy Patterson, assistant technical director for Glass Doctor.

“As for my insight and concern surrounding fully autonomous cars, I believe this is a moot point,” explains Patterson, “Based on the article by Levin, ‘These vehicles will not be on the highways in any measurable amount for at least a decade.’ … Other industry experts are predicting 2040 before there is a noticeable impact of fully autonomous vehicles on the road. There are too many variables to even consider a viewpoint on windows at this time.”

With all the technology flooding vehicles and the market, liability is a key issue, according to Patterson.

“We now have the question of liability to deal with in regards to Advanced Driver Assist Systems (ADAS) that are becoming a more integral part of this dynamic. The industry is faced with the critical task of determining how we deal with recalibration issues on the current systems on the road today. To think beyond today or even tomorrow would be irresponsible of us at an industry at this point,” Patterson says.

“I know the Automotive Safety Council is currently working feverishly on a response to the current variables …,” says Patterson.

2 Responses to What Will the Autonomous Future Bring?