Will Friday’s Ruling on Same-Sex Marriage Affect Your Business? 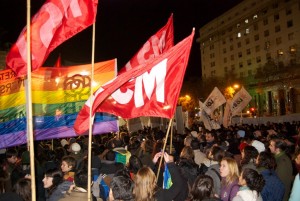 A crowd in support of gay marriage.

In a much publicized decision, the U.S. Supreme Court ruled 5-4 on Friday that same-sex Americans may marry. While 37 states and Washington, D.C., already have such laws on the books, 13 states do not. How will this decision impact your business?

Insurance benefits appear to be a top way companies could be affected, according to SmallBusiness.com.

Here are examples of how the decision may impact employee benefits, according to SmallBusiness.com:

—Employers may need to make administrative changes to cover same-sex spouses in states where they were not previously covered. For example, employers will need to modify enrollment processes and create or modify consent and eligibility forms.

—The state income tax treatment of employer-provided benefits could change for individuals with same-sex spouses. While further guidance will be needed, it will eventually be unnecessary for employers to continue to calculate imputed income.

—Eligibility rules for employer-provided benefits could change, which would open up eligibility to same-sex spouses in all states. In contrast, employers might discontinue same-sex domestic partner benefits, if all employees are able to marry in their state. Employees should check with their employer about any possible changes to their benefits or necessary administrative steps they may need to take to ensure coverage.

—With anticipated changes to the state income tax treatment, workers with same-sex spouses covered by employer plans will no longer need to pay imputed income on those benefits.

Janice Cowhey, partner at Marcum, an accounting firm, told The Street, that it could take up to two weeks for the U.S. Supreme Court’s decision to be finalized.

She said the ruling will affect some business people, primarily those who work in human resources.

“There are a lot of issues when it comes to benefits. [You have to make] sure your employer knows you have a spouse and giving them your marriage certificate so they withhold your taxes correctly,” she says.

For companies, Cowhey notes they need to “file taxes correctly.” It will likely impact insurance benefits.

What’s your take on the topic? Email your thoughts to jreed@glass.com or share them on the glassBYTEs.com™/AGRR™ magazine forum.

1 Response to Will Friday’s Ruling on Same-Sex Marriage Affect Your Business?