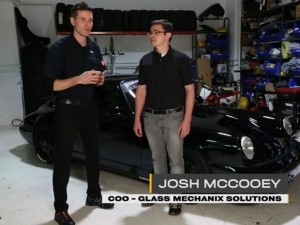 Windshield repair recently took center stage on a YouTube channel TV show. DriveClean host Larry Kosilla invited Josh McCooey, chief operating officer of Glass Mechanix Solutions, on his show to discuss the history, science and techniques behind a quality windshield repair. McCooey returned the favor by chipping the windshield of Kosilla’s Porsche 964 on purpose to show how a repair works.

“Kosilla, owner of Ammo Detail in New York City, asked me to explain what a windshield repair is and how it actually works,” explains McCooey. “Larry races his Porsche shown in the show and had two chips we repaired, but we actually did make two breaks to record for the show as well. The chips he had were simple half-moon breaks, so we showed close ups of how resin fills the break as air is being removed.”

Almost every type of car on the road has some type of glass damage, says Kosilla, introducing the show. 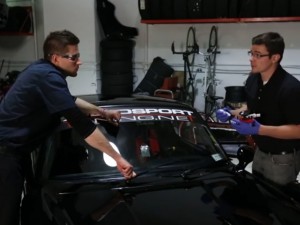 Kosilla (left) looks on while McCooey sets up his equipment for a windshield repair.

“Some are minor and can be easily repaired while others jeopardize the strength and integrity of your windshield,” he explains.

McCooey says: “I hope viewers understand when they need to worry about their rock chip damage, specifically when there is ‘black’ or air in the break. If you see black, it’s going to crack. If consumers could get that message engrained in their brains, I think it would make a huge difference nationwide. It makes a big difference to the consumers because they would get a repair done before they have to replace the glass. The difference to the technicians is because they would build customer loyalty and repair more breaks.”

McCooey walked Kosilla through the repair process step by step and offered a bit of history on windshields as well.

“Recording in New York City was a hoot,” McCooey says. “We met at the Manhattan Car Club, which is packed with exotic cars and at the time they were wrapping up a party. The building is in downtown New York City with 30 classic cars stacked from one end to the other. As people filed out around 12 a.m., I took some time to examine some of the classic cars for chips. Six of the 30 classics had windshield damage. … We didn’t rehearse or chat much about the show. Larry simply asked me to explain the history of glass, the invention of windshield repair and then perform some techniques.”

So how did McCooey meet Kosilla?

“Larry and I have gotten to know each other through our membership in the International Detail Association,” he says. “Drive is a popular YouTube channel geared toward automotive enthusiasts. DriveClean is a division of Drive that focuses on vehicle maintenance and cleaning. … Larry has long-standing rapport and respect among auto enthusiasts and people who care about their vehicles. … When I find someone who cares about quality repairing the correct way and is passionate about helping others learn, I’m always happy to assist.”

Taping for the program began at about 12:30 a.m. and wrapped up at about 4 a.m. after ordering some early morning New York-style pizza.

“I caught the 6 a.m. flight back home,” McCooey says. “His crew was amazing. Larry is a high-end auto detailer for celebrities by day and shares his passion through video at night.”