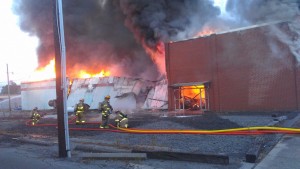 Bruce Gates received the call just before 6 a.m. on Saturday that his company’s fabrication facility had caught fire.

“My wife and I were celebrating our 39th wedding anniversary on Friday and on Saturday, I received a call at about 5:50 a.m. that the facility was on fire,” says Bruce Gates, vice president.

Gates was on scene for several hours while firefighters and first responders battled the flames.

“A lifetime of work and dreams changed in just an instant,” he says.

A few weeks earlier, the company had just had new gas lines installed into the facility. It was being renovated to serve as an aluminum fabrication center. The cause of the fire remains under investigation. The Fire Department estimates the loss at $500,000, but Gates says this is still under evaluation so the total loss has not yet been determined.

“I and my brother Tom bought the building in 1998 and had an insulating glass machine up in running by 1999,” he explains. “We also did any edging on glass and metal fabrication for storefronts.”

The company’s AGRR business is running as usual.

Thanks to the hard work of the fire department and first responders, the Bellefontaine shop next door to the facility remained unscathed.

“They put water down the alley between the buildings to keep it from spreading. We didn’t even receive any smoke damage,” he adds. “All computers were up and running, and we were ready to go Monday morning.” 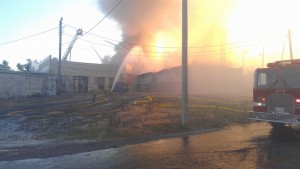 Bruce Gates spent several hours at the site on Saturday while the firefighters fought the flames.

“Although this has caused an impact on business, it hasn’t crippled us,” he says. “Losing the equipment is tough. But we still have metal fabrication up and running in our Sidney, Ohio, location. The biggest area to see impact will be insulating glass. We will have to outsource this in the interim. We also stored all of our Plexiglas in that building. We’ll have to order and replace a lot.”

Customers should not witness any impact in services, Gates says.

“They just may have to wait a bit longer for insulating glass,” he adds.

He says it’s too early to know yet what caused the fire. The facility has extensive damage. The building has some historical significance. It was a hanger from the McCook airfield, which pre-dated the Wright-Patterson Air Force Base.

McCook Field was an airfield and aviation experimentation station operated by the Aviation Section, U.S. Signal Corps and its successor the United States Army Air Service from 1917-1927. 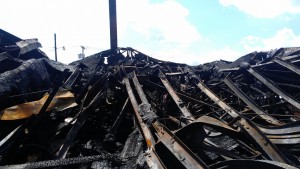 Bruce Gates views the aftermath of the fire.

No employees have been impacted by the loss.

“It will take another few weeks to sort through all this,” he says.

The company has five locations serving the Ohio area. It offers AGRR services, in addition to residential and commercial glazing.

“We live in a good community,” Gates says. “People have been very supportive. Some even offering us the use of a storage building. But we have enough space that we can work it out. We’ll get through this.”

Will Gates rebuild on the property? It’s too soon to tell, he says.