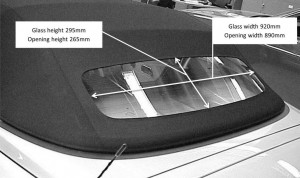 Fiat-Chrysler enclosed this diagram in a letter to the Office of Defect Investigation.

The National Highway Traffic Safety Administration’s (NHTSA) Office of Defect Investigation (ODI) has closed an investigation into reports that “the backlite window of the convertible top separates from its adhesive bond attachment” in the 2005 Chrysler Crossfire.

In 2011, Chrysler had extended its warranty on the model for 10 states after a review because it was considered this a “customer satisfaction” issue. An individual who lives outside of these states petitioned NHTSA for an investigation in June 2014.

“NHTSA’s review indicates that the separation of the backlite occurs gradually and the glass remains intact and inside the top after failure,” according to a report from the ODI.

NHTSA has received 212 complaints regarding the glass.

“In 2010, FCA U.S. initiated an investigation into reports of the Chrysler Crossfire backlite separating from the convertible top,” according to NHTSA documents. “In conjunction with an informal inquiry from ODI, FCA U.S. completed an extensive investigation into the general design and field performance of the Crossfire convertible top backlite assembly (including the 2005 model year). At that time, it was the conclusion of both FCA U.S. and ODI that the failure mode identified did not present an unreasonable risk to motor vehicle safety. As a result of the investigation, FCA U.S. determined that a customer satisfaction issue existed and offered a regional extended warranty for the subject vehicles.”

More specifically, Chrysler officials explain in the documents that the backlite is “dimensionally larger than the opening and is ultrasonically welded on the inside of the convertible top. If the glass becomes separated from the top, significant articulation of the glass within limited space would be necessary for the glass to pass through the smaller opening. … These design elements make it unlikely that the backlite would leave the vehicle and present a safety hazard.”

In September 2011, Chrysler extended the warranty coverage on the adhesion of the backlite to those vehicles originally shipped to dealers in Alabama, Florida, Georgia, Louisiana, Missouri, North Carolina, South Carolina, Tennessee and Texas.

“Although Chrysler extended the vehicle warranty to 10 years and/or 100,000 miles (whichever is first) in certain states, your vehicle is not in a covered state and not eligible for extended warranty,” writes Otto Matheke, acting director of the ODI, in a letter to the petitioner.