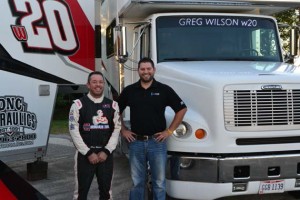 “I was watching my friend, Sprint Car racer Greg Wilson, compete and I noticed all of the trucks used to transport the racecars were always visible in the pit area during the race,” Benson says. “I knew we provide the windshields for most of those trucks and it occurred to me that there was an opportunity in those windshields.”

Jared’s idea was to embed LEDs into the windshield of the truck used to transport a Sprint Car from race to race. The LEDs, which are completely sealed within the glass, promote Greg Wilson Racing.

“I was surprised when Jared first mentioned the concept, as I had no idea LEDs could go inside the glass. I thought it was an interesting idea and told him to go ahead,” says Wilson.

With support from Greg Brecht and Tim Frey at Guardian’s Science and Technology Center in Carleton, Mich., Benson and the CGS team at the Upper Sandusky, Ohio, glass fabrication facility designed the LED circuits and manufactured the windshield.

“The windshield looks even better than I expected, a lot of people ask us about it,” Wilson says. “It really stands out on the truck, especially during night races. We now have a very unique way to promote our brand at the races and on the road.”