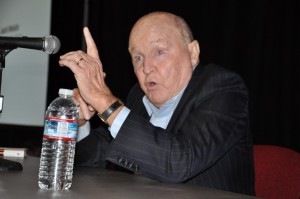 Welch’s ratings system is relatively well known and was quick to come up in the questions.

“The system breaks it down by top 20 percent, middle 70 percent and bottom 10 percent,” explained Welch, referring to how he ranked employees. “For the bottom 10, you counsel them and if they can’t get their act together, they have to go.”

He likened it to running a sports team.

“My belief is that the team that builds the best players wins,” he said. “It’s how I’ve done it all my life. … All we’re trying to do is be transparent. You have to have a system in place so they always know where they stand.”

There will never be a “pure” ratings system, Welch noted. The idea is to look at all employees and then have a hearty debate by managers as to who belongs where in the system. He recommends doing this twice a year.

“We used to get large groups together and we would have brutal battles,” he recalled. 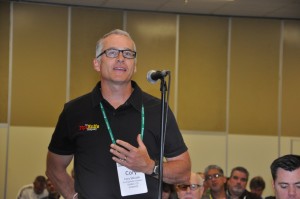 Cary Skluzak of The PipeKnife Company asks Jack Welch a question during the keynote.

How do you go about finding the right leadership structure for a medium-sized business, an attendee asked.

“I would never recommend one plan,” said Welch. “I recommend your business be flat, flat, flat. Hate layers with everything in your body. Layers are evil. Every time there is a layer there is a filter or spin. They get in the way. You want your company to be as flat as possible.”

Welch also received a question asking his thoughts on the presidential election.

“I’m a Republican. I pray to God we win the next election,” he said. “… I think Trump has been an incredibly powerful force. Most people might not agree with that, but he says things that most people think but don’t dare say. Now I know Trump very well so I am a little bit biased. I don’t think he’s going to be president. But I may be wrong—I didn’t think he was going to go this far. I’m not sure he did either. But the fact that he is there is almost like addictive. You want to turn the TV on to watch what he’s going to say. And when 25 million people will watch a debate 18 months from the election, he’s surfaced.”

“Her name wouldn’t have been mentioned if there were 2 million people watching the debate,” he said. “He created all that oxygen that gave a lot of people a chance to look at lots of candidates. I think the Republican party has a lot of good, good candidates. I don’t know yet where I’m going, but I want to keep watching to see where I go, but I’m excited about the field.”

Though a staunch Republican, Welch hopes Hillary Clinton gets the Democratic nomination for president.

“I’m not excited about killing Hillary because I think Joe Biden might be tougher to beat than Hillary,” he said. “I think Hillary’s beatable. So if you’re a Republican, I wish they would lay off her a little bit and get her later. Because, remember, the last time they nailed her and we got Barack. Be careful what you wish for. That’s my view of the election.”

Welch also mentioned that he isn’t thrilled with the current Administration, pointing to the unemployment level. According to the U.S. Bureau of Labor Statistics, it stands at 5.1 percent for September 2015. The number of people who are out of work is a real problem, he said. This brought up an interesting question from the audience. How do AGRR companies find the technicians they need? Welch asked how many are currently seeking technicians and most of the hands in the room went up. 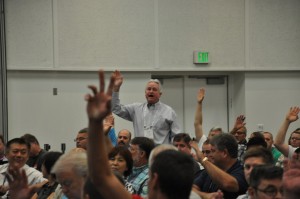 Welch asked how much technicians are paid. An audience member responded that they are started out at $10 an hour at his company.

Another attendee chimed in saying, “$10 an hour isn’t going to attract who we need. We pay $15 an hour. We also pay on a commission model. We find they work much harder and faster and get stuff done.”

“It’s obviously a wage issue,” said Welch. “Can you afford more money to make it more attractive? … Obama should be driving trade in schools like crazy. How good would it be if community colleges were training some of these people [you need] instead of teaching liberal arts, which is killing these kids.”

Welch concluded his keynote by offering some general advice.

Owners need to remember that people hate change, he said. 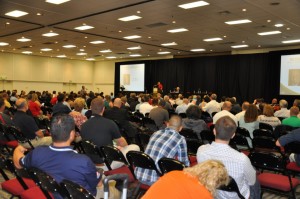 “Another part of your job is not to give all these directives,” he added. “… You can’t all of the sudden have bureaucracy and have 20 rules to stop people from getting there. All those little bureaucrats who are checking the boxes are slowing you down. I like to use the analogy of curling. You’ve got to be brooming away stuff in the way so people can act and do things. In my experience … I’ve looked at thousands of managers. You have to have a generosity gene. You have to love to see people promoted. You’ve got to love peoples’ success. … You’ve got to love giving raises and bonuses.”

The best managers have the generosity gene, he reiterated.

“You go to work every day to have fun,” he explained. “You find all kinds of ways to win. There are small victories all the time. We found a way to bring a keg in on everything [at GE]. Make little victories into big victories. Your job is to make it fun if you’re a leader. Be the chief fun officer. You’ve got a huge responsibility. You are responsible for peoples’ lives. Make it a big success for them and you have luxury to impact peoples’ lives.”