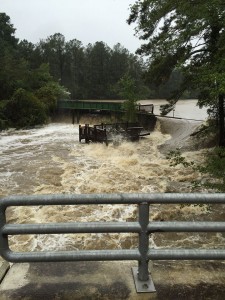 AGRR company owners are finally getting their businesses back on their feet after torrential rain and flooding severely disrupted work last week near Columbia, S.C. However, it will likely be months or even a year until all of the roads are passable again and the true cost of damage is tallied.

After being closed for several days Pilkington North America’s distribution center in Columbia, S.C., is back up and running today.

Chuck Stakely, a local Pilkington North America customer service representative, adds, “Everyone is doing well. We are open as of today for full business. The team worked really hard to get things up and running. Due to all the flooding, the employees couldn’t get into the building to begin with.”

Mary Anne Jones said her company has been feeling the disruption from nature.

“Our suppliers, including Pilkington, are having a hard time getting to us because of the road conditions,” explains Jones, the owner of Absolute Glass. “Our business is located in Lexington, S.C., which had ponds and numerous dams’ breach that washed out the roads. We service the Central Midlands of South Carolina, which was hit hard also.”

Her company was closed for two and a half days last week because the governor told residents to stay off the roads. 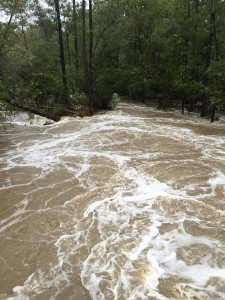 Another look of the dam breach from Mary Anne Jones.

“Things are slowly getting back to normal, but it may be six to 12 months before all the roads are passable again,” Jones says. “It has severely affected our business. Most people don’t realize the severity of our situation.”

“Some places are hit way worse than others,” he says. “We’re still getting parts but some of our vendors have been hit. Some are just now opening. Vehicles on top of vehicles have been flooded.”

A lot of roads remain impassable and it could be a long time before that gets better.

“Our mobile technicians are doing the best they can,” he explains. “Sometimes a job 10 minutes away takes 25 minutes to get to.”

The damage is just too much to get a grasp on, Prosser says.

“There are just too many flooded cars to count. They are just totaled,” he notes. “Once the roads are passable again, I do think it will cause damage to windshields. The roads will just be so damaged.”

Food banks, the Red Cross and churches are all seeking donations.

“People are contributing money, clothing, food and helping in all kinds of different ways,” he adds.

The death toll stands at 21 in North and South Carolina, according to a local report.

“Twenty-seven dams have failed, 129 more are in jeopardy, and more than 300 roads and bridges remain closed. Flood warnings are still in effect in parts of the state,” according to the report.