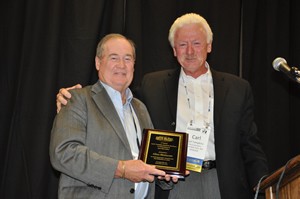 “To even pay him proper due would take us to Saturday,” said Carl Tompkins of Sika. “He has devoted his entire life to the automotive glass industry. His company grew from one shop to hundreds of locations.”

Skidmore joined Central Auto & Window Glass, which later became a part of TCGI, in 1967, and has held increasingly senior positions within the company during the last 48 years. His company now has more than 1,800 locations and is in 43 countries.

“In 1968, I started coming to meetings,” said Skidmore. “I was quite young. I encourage all of you to continue coming to these events. I learned so much. Much of my success comes from coming to events like this. I think this industry can really be proud of itself … for what it has done and what it continues to do. It’s a great honor that I accept this award.” 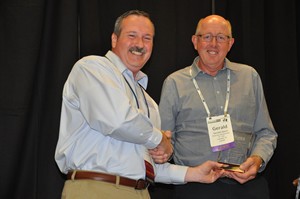 Jeff Reddell, president of the NWRA, honored Gerald Zwart, also known in the industry as “Dr. Chip,” with the NWRA Repair Pioneer Award for Excellence in Advancement of Auto Glass Safety.

“He embraced repairs as no one has,” said Reddell. “He helped make us well known. He always appeared in his lab coat [as Dr. Chip in commercials,]” he added.

In 1984, Zwart established Clearview Windshields. He and his wife, Jane, operate the company.

Zwart is a past member of the NWRA board of directors and has served on the ROLAGS™ Standards committee. He was instrumental in forming the Iowa Chapter of the Independent Glass Association and is a past and current judge of the GlasWeld Windshield Repair Competition in Honor of Walt Gorman.

Zwart is now semi-retired but remains an important part of the windshield repair industry.

“If you want to be a leader in your industry in your area then you need to be here,” he said. “And if you want to step it up one more notch and really be a leader, join a committee. I was on the NWRA board of directors.” 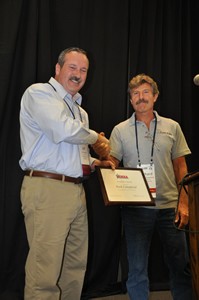 The NWRA also introduced the President’s Award, which went to Rich Campfield, outgoing president of the association and founder of Ultra Bond.

“I have tried endlessly to help the windshield repair industry,” said Campfield. “Repair first and when necessary, replace.”