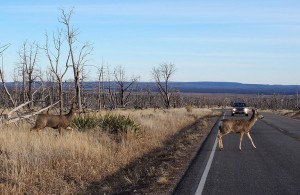 With deer mating season upon us, many AGRR company owners in the north are seeing an increase in automotive glass damage as these frisky animals run haphazardly into the road. “I saw collisions with deer picking up two or three weeks ago. The does are on the move and the bucks are chasing them,” says Ted Corwin, owner of Cherryland Auto Glass in Traverse City, Mich.

His company services many of the auto body shops in the Traverse City area.

“I pull out the broken windshields so the body shop technicians can repair the roof or whatever damage necessary, and then I install a new windshield,” Corwin explains.

“Body shops are getting more business and they need glass,” he says. “It started about two weeks ago and will probably continue until the weather turns freezing.”

Gary Louth, owner of Buffalo Auto Glass in Buffalo, N.Y., says it’s a bit early for a lot of deer-related damage in his area.

“By the time we usually see it, it’s February and March,” he explains. “But I definitely see more business from deer hits. We’re just getting into the heavy running season. If it’s serious damage, it’ll take time for the vehicle to go through appraisal and the collision shop. It’ll be a least a month until we see some damage.”

A customer service representative with Advanced Auto Glass in Youngstown, Ohio, noted it will be a while before her company sees an impact.

“In the next month or so we’ll see more,” she says. “We work with local auto body shops.”

U.S. drivers are as likely to have a claim involving a collision with deer, elk or moose than they were last year, according State Farm. The odds are about one out of 169.

“That likelihood more than doubles during October, November and December, when deer collisions are most prevalent,” according to a statement from State Farm.