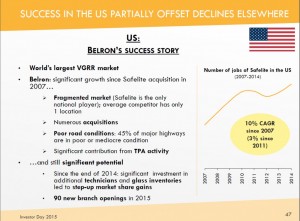 “Will glass breakage stop and go to zero? Absolutely not. But we have seen breakage decline and we’ve seen it over a number of years. We’re not seeing it change,” said Gary Lubner, CEO of Belron during an investor day conference for D’Ieteren held last week in London. As demand for AGRR services declined worldwide, what has helped drive the company’s growth from 5.3 million AGRR jobs in 2005 to 11 million in 2014? The answer: United States-based Safelite, according to the CEO.

“This growth was driven by a number of things, including our big U.S. acquisition in 2007,” said Lubner. D’Ieteren is parent company to Belron and Safelite. “Another driver was the weather in 2009, 2010 and 2011,” he added. “And then we’ve seen things settle down and go to pretty much zero growth.”

Though other markets such as the United Kingdom and Brazil have proved challenging, Lubner called the U.S. market a growth story.

“It’s the biggest market in the world. I think we have done a pretty good job since 2007 despite some market issues,” he said. “We still see that there is some potential in the U.S.”

Brand awareness in the U.S. is one of the lowest in the world for the company. It stands at 27 percent, compared to 88 percent in Belgium and 61 percent in the U.K., according to Belron.

“If you ask someone in the street, 88 percent of people in Belgium would say they would replace their car windscreen at Carglass,” Lubner explained.

This is one of the reasons he feels there is growth potential in the U.S. When going through the immigration checkpoints at a U.S. airport on a recent trip, Lubner said he mentioned to one of the Transportation Security Administration agents that he worked at Safelite. This was met with the agent singing the Safelite jingle. 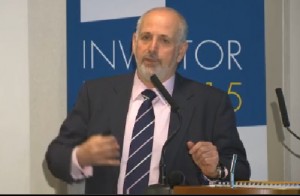 “It offers us a big opportunity because there isn’t anyone else in the U.S.,” said Lubner. “The competition is extremely fragmented, which is good and bad. There doesn’t seem to be a genuine alternative to the things we can do. But it’s very price sensitive in the U.S. But we are opening new branches. We are expanding our services. We are doing all of the things from a Belron perspective we know work.”

Since 2007, the Safelite business has grown 10 percent per annum on an annual growth compound rate, according to Belron’s CEO.

“This is despite the market being flat or a little bit down,” he said.

However, he noted it will be a challenge to maintain the growth rate going forward because two harsh winters bolstered previous results. He added that next year will be another challenging one.

Belron has set a 4 percent sales growth target worldwide for 2019.

“We think this is still achievable, but we think it is stretching because remember it’s against a backdrop of all of our big markets declining. The U.S. might not be declining as much as Europe, but certainly all the big European markets are declining,” he said.

Lubner said Belron is exploring a range of ideas to expand its services outside of AGRR.

“We believe we have a number of capabilities in Belron both from a global point of view and a national point of view. … It’s a very live project that is going on now within Belron,” he said. “We have made no decisions. There is a lot more work to do.”

In the meantime, the company plans to continue investing in its AGRR business to produce results.

“We are determined to create value,” said Lubner. “We are going to be looking at all sorts of things in the vehicle glass repair and replacement market around technology in particular. We’ll be looking at investments in IT and systems and making sure people can get to us as easily as possible.”

1 Response to Lubner: The U.S. Is Belron’s Success Story