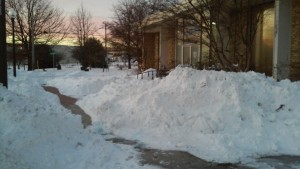 The blizzard walloped the Mid-Atlantic over the weekend bringing more than 20 inches of snow to Baltimore and Washington, D.C. The Federal Government was shut down, just reopening today, and even the Washington Auto Show was put on hold as travel became treacherous. But what does all this snow mean for AGRR businesses? Most are back open and expecting an increase in business.

“Usually there is a few weeks delay in the business spike, but we’re fielding a lot of phone calls now,” says Brian Novak, president of Silver Spring, Md.-based Banner Glass. “The blizzard is unfortunate for a lot of people, but fortunate for us.”

Two of the company’s shops in Loudoun County and Fairfax, Va., received the worst of the weather, he says.

“They had about 40 inches of snow drifts in their parking lots,” Novak explains. “Everybody was open for business Monday, but they were still digging out. But the phones were open there and we were booking work.” Technician safety is important to the company, he notes.

“We play it by ear when it comes to mobile work,” Novak says. “A lot of technicians did not drive their trucks home so they wouldn’t get stuck. This storm was well forecasted. We have to really question customers who want mobile service and make sure their vehicle isn’t under three feet of snow and they don’t understand why we can’t do the work.”

Deliveries from distributors were interrupted.

“We were able to pick up the parts we needed,” Novak says. “The storm started early Friday afternoon and we knew how bad it would be. We released all employees by 1 p.m. And we didn’t worry about deliveries on Saturday because we were closed.”

The Delmarva Peninsula, the market for Mr. Go-Glass, was also inundated with snow. The company has locations in Delaware, Virginia and Maryland.

“At the Dover, Del., location, we received 12 to 14 inches,” says Chad Dansby, a manager for the company. “By the time Monday came around we were in good shape. A few employees couldn’t get in Monday due to living on deeper, back roads, but we didn’t close any locations or open late.”

He notes Delaware was under a Level 2 Driving Restriction over the weekend, meaning only “essential personnel” were permitted on the roads.

“You couldn’t go out,” Dansby says. “That [restriction] was lifted prior to us opening back up. We’ve seen a little spike in auto glass. It’s usually 10 to 14 days after an event like this that auto glass will see a real uptick.”

The company did not receive any deliveries from distributors over the weekend, and Monday was a little off, he explains.

“We did get some deliveries Monday for Tuesday’s jobs, so we were able to catch back up on inventory,” Dansby says.

“As of now, the main roads are in good shape,” he says. “Doing any work in the big cities, like Philadelphia or Baltimore is almost impossible unless the vehicle is in a cleared parking lot or on plowed streets. Baltimore was closed Monday and the Philly area was very limited. We had several techs who couldn’t get in because they live in the city or in a rural area that wasn’t plowed.”

While Van Wyk hasn’t see an upswing in business yet, he expects one toward the end of this week, early next week.

“I’m looking forward to a busy February,” he says.

Meanwhile Smith Auto Glass and Upholstery in Baltimore, Md., was closed for a few days. “Not everyone could get in,” says Gary Smith, one of the company’s owners. “The commercial lots were plowed first so we were able to get out to do some mobile work. Right now things are a bit slow. It’s hard to say if business will pick up.”

“The weather hit some of our service centers pretty hard,” says Stacy Ulrich, Pilkington North America AGR marketing specialist. “We had about 15 or so service centers who had issues with the weather starting on January 22nd. Some of them were only able to stay open for ‘will call’ because the roads were too bad, some closed completely, some delayed the time they opened, and others stayed open for half the day, then closed. It took some time to get the snow cleared but by January 27th, all our locations in the North Eastern region were finally up and running full strength.”

Additional automotive glass distributors did not return a request for comment at press time.

Was your company located in the damage path of the storm? Share your stories by emailing jreed@glass.com.