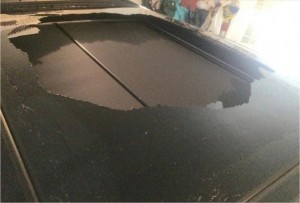 Glenn purchased a new 2014 Hyundai Santa Fe Sport in September 2014 with a panoramic sunroof. In February 2015, when the vehicle had about 10,000 miles, Glenn was driving with his wife and daughter when the panoramic sunroof shattered, showering everyone inside the vehicle with glass, according to the court documents. Neither the dealership nor Hyundai would cover the costs of repair. Glenn filed a claim with his insurance company.

“In the class vehicles, the glass used in production cannot withstand the pressures and flexing that the sunroof frame and vehicle demand. The consequence is that under ordinary driving conditions, the glass spontaneously shatters,” according to the court documents.

In 2012, the automaker issued a recall for certain model year 2012 Hyundai Veloster vehicles saying the panoramic sunroof assembly is in question for possible weakening during factory installation.

“Given the speed and frequency with which the panoramic sunroofs in the class vehicles shatter, it is likely that Hyundai knew of the danger of shattering before it first began selling and leasing the vehicles,” according to court documents.

The lawsuit was filed in the U.S. District of Central California because that is where Hyundai America is based. The sunroof manufacturer was not identified.

Hyundai had not yet responded to the lawsuit at press time.