Two big announcements came from U.S. Department of Transportation (DOT) Secretary Anthony Foxx during the North American International Auto Show in Detroit this week. The first was made yesterday evening when Foxx said the administration has proposed a 10-year, $4 billion investment plan to “accelerate the development and adoption of safe vehicle automation through real-world pilot projects.” In the second, which came today, Foxx announced 18 automakers have signed a DOT safety agreement. 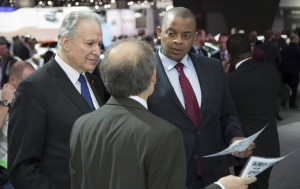 Automated vehicles have the potential of saving lives, according to Foxx.

“We know that 80 percent of car accidents are due to human error,” Foxx said yesterday evening. “So we ask ourselves, what happens if human error was eliminated? If the technology meets its promise, my back of the envelope math tells me that more than 25,000 lives would have been saved in 2015 alone.”

The President’s proposal allows DOT to test automated and connected vehicle systems in different corridors and different states and work to ensure a proper framework for these vehicles, he said.

Here are the steps the agency plans to take in 2016:

“We are committing to a six-month timeline to offer best practice guidance and propose model state legislation,” Foxx said.

More information on the proposal will be coming, according to the DOT secretary.

DOT Secretary stands with representatives from the 18 automakers which have signed the safety agreement.

In light of the record numbers of vehicles recalled and civil penalties issued by NHTSA, 18 automakers have signed a DOT agreement on a “set of broad-ranging actions to help make our roads safer and help avoid the sort of safety crisis that generates the wrong kind of headlines,” Foxx said today.

“Additionally, today’s actions strengthen the industry’s efforts to protect vehicle owners from cybersecurity risks,” he explained. “We all know that the performance today’s vehicles achieve is due in large part to an increasing amount of computer hardware and software under the hood and behind the dashboard. And the era of automated vehicle technologies we’re ushering in will add to that. So we have pledged to work collaboratively to mitigate cyber threats that could pose unreasonable safety risks. We will engage our best cybersecurity minds, share known vulnerabilities and countermeasures, and adopt best practices from within as well as outside of the auto industry.”