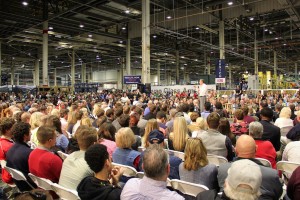 Ohio Gov. John Kasich spoke to a crowd of about 1,100 at Fuyao Glass America on Friday.

“It went very well,” says Mike Fullenkamp, FGA operations supervisor. “He talked about his accomplishments in Ohio, such as balancing the budget. He also talked about his upbringing and took a lot of questions from the crowd.”

Gov. Kasich is ramping up for the Ohio primary Tuesday.

He pointed toward private development group JobsOhio, which was created while he was in office, for landing companies such as FGA. The glass company is expected to employ 2,000 at its Moraine, Ohio, plant this year.

FGA is currently producing one million windshields, backlites and sidelites a year in the state. The China-based automotive glass manufacturer has made its U.S. home in a former GM engine plant that was shut down.

While most of the glass produced is for OE applications, aftermarket production is not far behind, said FGA president John Gauthier said in a recent interview with glassBYTEs.com™/AGRR™ magazine editors for the January/February magazine. 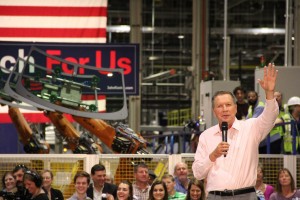 About 1.5 million units, 25 percent of the production, will be aftermarket glass.

To listen in on the town hall meeting, visit Gov. Kasich Facebook page by clicking here, and scroll down to the March 11 post “Live Town Hall from Fuyao Glass America in Moraine, Ohio.”

For more from our editor’s visit to FGA in Ohio, click here.