AAA: Consumers May Not Be Ready for Autonomous But They Want ADAS 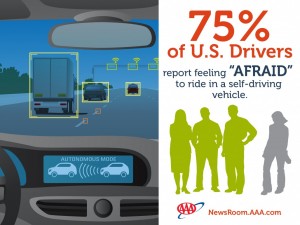 As automakers and technology companies move full steam ahead to produce fully autonomous vehicles in the near future, a big question is whether or not consumers are ready for self-driving vehicles? New study results from AAA indicate consumers may not be ready. Three-quarters of Americans are “afraid” to ride in a self-driving vehicle, according to the research.

Advanced Driver Assistance Systems (ADAS), a precursor to autonomous vehicles, has potential to change the way the AGRR industry does business. Why? Because these systems include cameras, which are often connected to the windshield. 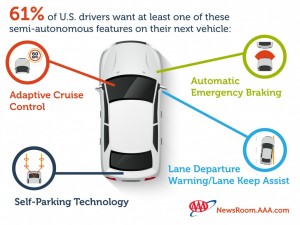 “Nearly two-thirds (61 percent) of American drivers report wanting at least one of the following technologies on their next vehicle: automatic-emergency braking, adaptive cruise control, self-parking technology or lane-keeping assist,” according to a statement released by AAA.

The primary motivation to acquire these features is safety at 84 percent. Convenience comes in second at 64 percent and reducing stress takes third at 46 percent.

Baby Boomers are more likely to cite safety as their reason than Millennials (89 percent to 78 percent), according to AAA.

Millennials are more likely to list convenience as the reason they want semi-autonomous features (75 percent). Wanting the latest technology was next in line at 36 percent.

Meanwhile, women are more likely to cite reducing stress as their motivation to acquire the technology (50 percent for women versus 42 percent for men).

Consumers who are not interested in these advanced features by and large say they trust their driving skills more (84 percent), according to AAA. Feeling the technology is too new and unproven was next at 60 percent and not wanting to pay extra for it garnered support of 57 percent. Moreover, 50 percent claimed they did not know enough about the technology and 45 percent told AAA they find it annoying.

One-in-four female drivers (23 percent) cite feeling the technology is too complicated to use as a reason for not wanting it, compared to 12 percent of male drivers.

“While six-in-ten drivers want semi-autonomous technology in their next vehicle, there are still 40 percent of Americans who are either undecided or reluctant to purchase these features,” says John Nielsen, AAA’s managing director of automotive engineering and repair.