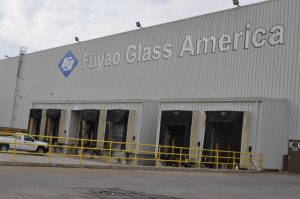 The Occupational Safety and Health Administration (OSHA) issued one citation, alleging two “serious” violations at Moraine, Ohio-based Fuyao Glass America. The monetary penalty associated with the citation is $14,000. “In a project as large and complex as this is, it’s not surprising there are going to be areas that we can improve in safety,” says John Gauthier, president of Fuyao Glass America.

“These were two serious violations involving lack of machine guarding and not securing floor coverings,” says Rhonda Burke, a spokesperson for the U.S. Department of Labor.

According to the citation, “One or more methods of machine guarding shall be provided to protect the operator and other employees in the machine area from hazards such as those created by point of operation, ingoing nip points, rotating parts, flying chips and sparks.”

On October 21, 2015, a machine guard was not in place to prevent employees’ exposure to pinch points created within the roller system on one of the lines, according to OSHA.

The proposed monetary penalty is $14,000 for both alleged violations.

“Someone can call OSHA anytime with concerns,” says Gauthier. “If OSHA receives complaints they think merit their inspection, they will come in and look. We’ve been working very closely with OSHA and all of the regulatory agencies. We took action as quickly as we possibly could to get these violations addressed. We’re still in ongoing discussions with OSHA as to how to close these issues permanently.”

An informal conference is scheduled for next week with Fuyao and OSHA officials to discuss the citation.

OSHA has received four complaints about safety at Fuyao Glass America, Burke says. Three of the complaints were filed in October 2015. The fourth was filed in February 2016. OSHA found no violations for two of the complaints and the inspections were closed. The third resulted in the citation. An inspection for the February complaint is ongoing, says Burke.

“OSHA must issue citations, if violations are found, by August 2016,” she says.

The company now has 1,500 employees and contractors at the plant, notes Gauthier.

“The folks from OSHA have been very reasonable,” says Gauthier. “We’ve learned something from them. All we want to do is get better and ensure all employees and everyone associated with this project is safe.”