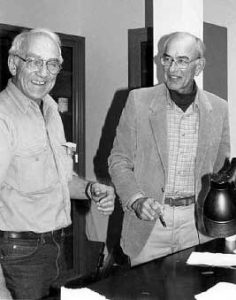 Dr. Frank David Werner Sr., who patented a two-part epoxy windshield repair resin, died May 7 at age 94 in Jackson, Wy. In 1972, Werner partnered with Gerald Keinath and founded a business in the basement of Keinath’s home in suburban Minneapolis that became Novus.

“Frank was one of my mentors,” says Jon Thomas, Novus director of manufacturing and engineering, who has been with Novus 34 years. “He was a brilliant man and very family oriented. I considered it a real privilege to work with him.”

“He was on a family vacation and very thrifty about stuff,” Thomas says. “He took his family station wagon to Canada and decided to drive through the night while his family slept in the car. Somewhere during the trip, a rock got flipped up by a car in front and hit the windshield. It put a stone chip in the glass. As he was driving, he started to think about that. What a waste it was to throw a good windshield away for a little chip.

“As soon as he got back from the trip he discussed his idea with Bill Wiele, a chemical engineer with Rosemount Engineering. They put their heads together and came up with a way to fill the chip. Back then it was a two-part epoxy resin that would stop the crack from growing and cosmetically cover up the blemish. It was the birth of windshield repair,” says Thomas.

There were other people doing windshield repair, Keith Beveridge, senior vice president of Novus, noted. But it was not in the form it is done today.

“He put a whole team together,” Beveridge says. “We wouldn’t be where we are today without Frank’s leadership, intelligence and technical abilities.”

Werner was the technical guy. He liked to be in the background inventing things, so he partnered with Keinath, according to Beveridge. They both left corporate America to start the business, Beveridge says.

Werner invented a multitude of products over the years, including the first foam-fitted ski boot with buckle, according to Thomas. He had 77 patents over the years and some are still pending.

He held two doctorate degrees, one in physics and one in aeronautical engineering.