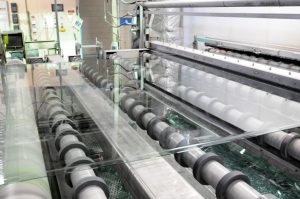 NSG Pilkington will invest an estimated $40 million this summer to repair one of its two float glass lines at its Rossford, Ohio, facility, according a statement released from the company. The Ohio facility produces float glass, some of which supplies Pilkington’s original equipment manufacturing and aftermarket fabrication of automotive glass.

“The line is for both OE and aftermarket, with a small amount going to architectural,” according to the company’s statement.

The furnace to be taken offline was first lit in 1998, according to Pilkington. Raw materials, including sand, enter the furnace in the beginning of the glass-making process. After being heated to extreme temperatures and undergoing a refining process, these materials become a long sheet of glass. At the end of the process, the glass is trimmed into manageable sizes for shipments that are bent and molded into OE and aftermarket automotive glass.

“As the natural gas needs will be cut in half during the repair of the one furnace, this is the ideal time to replace the gas line. The backup line can handle the full demand of only one furnace at a time,” according to the statement.

Taking a float glass furnace offline is rare, according to the company.

“It generally only happens once in ten to 15 years,” the company reports.

Repairs are set to begin in June and last through September.

The Rossford, Ohio, Council has passed an ordinance to allow Pilkington to use part of the property at a local landfill site as a staging area to replace the gas line. The gas line will run alongside the landfill.