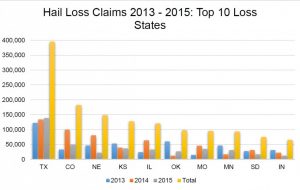 The graph shows the top 10 states for all hail loss claims. Source: NICB

Hail loss claims under personal auto insurance policies from January 1, 2013 to December 31, 2015 declined by 16.4 percent. This is according to a three-year analysis just released by the National Insurance Crime Bureau (NICB).

“If auto glass was damaged by hail and a claim was processed for that damage, then it likely would have been captured in this data,” says Frank Scafidi, a spokesperson for the NICB.

Automotive hail damage claims accounted for 34 percent of all claims, or 723,743, filed over the three-year period, according to the report.

The number filed under personal auto insurance policies was second only to homeowner policies.

“Tell a claims adjuster in Texas today that hail damage claims decreased over the past three years and they might consider you crazy,” according a statement released by the NICB. “Dealing with thousands of claims from the recent record storms in the Dallas and San Antonio areas, insurers and their customers know how much Mother Nature can be peaceful one day and in a fury the next.”

From January 2013 to December 2015, the country experienced 10 major hail-producing storms, according to the National Oceanic and Atmospheric Administration (NOAA). Each of these storms resulted in more than $1 billion in property damage.

According to the NICB: